Roger Federer and Serena Williams to begin their Wimbledon 2021 campaigns on Tuesday against Adrian Mannarino and Aliaksandra Sasnovich, respectively. 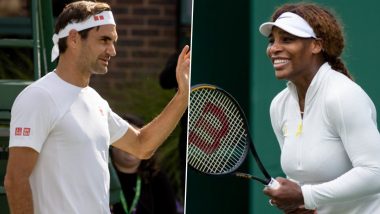 Wimbledon, one of the biggest tennis carnivals is up and underway in grand fashion and this year too, star players would be coming together to etch their names in history books, cause unforgettable upsets and create memories that tennis fans would cherish for a long time to come. The competition already got underway with a bang with the first round on Monday with stalwarts like Novak Djokovic and Andy Murray racking up victories. While Djokovic faced a tough challenge from Jack Draper, Murray won his first match in Wimbledon singles competition since 2017. Wimbledon 2021, Shots of The Day: Novak Djokovic Foxed by Jack Draper to Other Incredible Moments From Day 1 at SW19

On Tuesday, modern-day great and eight-time champion Roger Federer would kickstart his Wimbledon 2021 campaign by taking on Frenchman Adrian Mannarino. Federer had lost a memorable Wimbledon final two years ago. Federer's opponent Mannarino would also not be easy to beat as he has reached the fourth round for three times. Download PDF for Wimbledon 2021 Men's Singles Draw free

Serena Williams would also kickstart her women's singles campaign with a match against Aliaksandra Sasnovich. The American star player hasn't ever lost a first-round match at Wimbledon and would be looking to maintaining her dominance when she takes on Sasnovich. Williams would be able to equal Margaret Court's count of 24 Grand Slams. Download PDF for Wimbledon 2021 Women's Singles Draw free.

The first round fixtures of the men's doubles category would begin on Wednesday, June 29. The Indian pair of Divij Sharan and Rohan Bopanna would be seen in action against the duo of Edouard Roger-Vasselin and Henri Kontinen. Download PDF for Wimbledon 2021 Men's Doubles Draw free.

Sania Mirza and Ankita Raina would feature in the first round of the women's doubles category on Wednesday, June 29. While Mirza would team up with Bethanie Mattek-Sands against Desirae Krawczyk and Alexa Guarachi, Raina would have Lauren Davis as her partner to take on the pair of Asia Muhammad and Jessica Pegula. Download PDF for Wimbledon 2021 Men's Doubles Draw free

The draw for the mixed doubles category hasn't been announced yet and would be available on June 30, Wednesday.

(The above story first appeared on LatestLY on Jun 29, 2021 03:07 PM IST. For more news and updates on politics, world, sports, entertainment and lifestyle, log on to our website latestly.com).