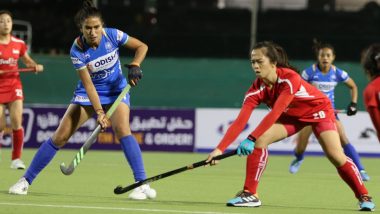 Muscat (Oman), Jan 24: India bounced back in style from their 0-2 defeat to Japan, thrashing Singapore 9-1 to book a place in the semi-finals of the Women's Asia Cup hockey championship here on Monday. By virtue of this win, India sealed a spot in the 2022 FIH Women's Hockey World Cup to be held in Spain and the Netherlands later this year. In what turned out to be a goal-fest, Gurjit Kaur (8', 37', 48') bagged a hat-trick, Monika (6', 17') and Jyoti (43', 58') scored a brace, while Vandana Katariya (8') and Mariana Kujur (10') contributed a goal each to India's comprehensive victory. Li Min Toh (43') scored the only goal for Singapore. Women's Asia Cup Hockey 2022: India Thrash Malaysia 9-0 in Opening Match

India now take on South Korea in the semi-finals at the Sultan Qaboos Sports Complex here on Wednesday (Jan 26). India were quick to get off the blocks in the first quarter, making inroads into Singapore's circle with a structured attack and dominating the possession throughout the first 15 minutes. The first goal came through Monika's clear-cut reverse flick in the 6th minute and in no time India went on to take a 3-0 lead, courtesy of goals from Vandana and Gurjit, who successfully converted a penalty corner in the 8th minute of the match.

In the next minute, the Indians earned their second penalty corner but Deep Grace Ekka's attempt was saved by Singapore goalkeeper Yu Tong Liu, according to information reaching here. India bagged their fourth goal via young forward Mariana in the 10th minute. Pushing for more opportunities within the opponent's striking circle, India earned their third PC in the dying minutes of the first quarter, but Gurjit's attempt was blocked by Singapore's defenders.

Continuing with their structured attack, India earned yet another PC, which was duly converted by drag-flick specialist Gurjit in the 37th minute of the match. After having recovered themselves in the defence, Singapore earned a hard-fought PC in the 43rd minute of the third quarter and managed to fetch the first goal with Li Min Toh's attempt.

However, India responded straight away with a goal from Jyoti, who smartly found the back of the net through a cross from the left flank making the scoreline 7-1 at the end of the third quarter. Continuing to dominate the proceedings, India went on to add the eighth goal to their tally through Gurjit's PC conversion in the 48th minute.

Minutes later, Gurjit got a chance to add the team's ninth and her fourth goal to the tally through back-to-back PCs but missed out on converting it. Jyoti, however, went on to add her second goal to India's scoreline in the 58th minute, thus ending the match with a 9-1 score.

(The above story first appeared on LatestLY on Jan 25, 2022 08:32 AM IST. For more news and updates on politics, world, sports, entertainment and lifestyle, log on to our website latestly.com).