Well, yes! The highlights of Wrestlemania, this year, do suggest it was one of the best Wrestlemania(s) in a long time for the WWE fans! 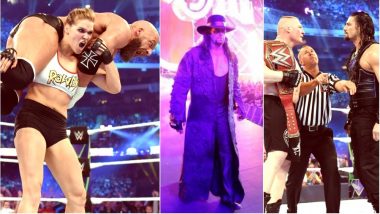 The Undertaker did appear at Wrestlemania 34. Daniel Bryan competed in-ring for the first time in three years. Former UFC champion Ronda Rousey made her debut in the ring for World Wrestling Entertainment (WWE). Bray Wyatt returned at Wrestlemania and assisted Matt Hardy. Well, yes! The highlights of Wrestlemania, this year, do suggest it was one of the best Wrestlemania(s) in a long time for the WWE fans.

Wrestlemania 34 lived upto its hype. A lot of predictions and speculations that were made prior to the event were quashed, and how! The Big Dog ‘Roman Reigns’ couldn’t get past Brock Lesnar; Finn Balor couldn’t win the Intercontinental Championship; Asuka failed to continue her winning streak; Both Sami Zayn and Kevin Owens were unable to thwart Shane McMahon and Daniel Bryan.

However, one thing that the WWE fans have wanted for a long time, did happen. John Cena’s challenge was finally answered, and how! The Dead Man returned to compete at Wrestlemania one-more-time. In the match which was billed as the dream match between the two, The Undertaker and John Cena did compete at Wrestlemania 34! It took less than 5-minutes for The Undertaker to decimate John Cena with his finishing move, ‘Tombstone Pile-driver’.

Seth Rollins vs. Finn Balor vs. The Miz (c)

The New Day vs. The Bludgeon Brothers vs. The Usos (c)

John Cena vs The Undertaker

Zayn & Owens Will Be Reinstated If They Win; Remain Fired If They Lose

The Show of the Shows, Wrestlemania 34, took place at Mercedes-Benz Superdome, in New Orleans, in the United States on April 8, on Sunday. It is always interesting to see what will happen next on Monday Night RAW, a night after Wrestlemania. Will Roman Reigns still be in the WWE Title picture? Will a former WWE Superstar return? Whatever happens, the speculations have got the fans excited nonetheless. Stay tuned with us for wall the latest updates about World Wrestling Entertainment (WWE).

(The above story first appeared on LatestLY on Apr 10, 2018 12:50 PM IST. For more news and updates on politics, world, sports, entertainment and lifestyle, log on to our website latestly.com).