Donald Trump Won’t Return to Twitter, Will Use His Own Truth Social 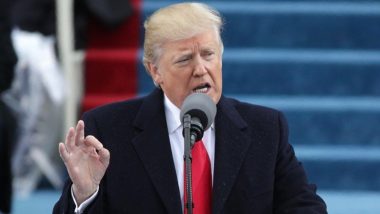 San Francisco: Former US President Donald Trump has decided not to join Twitter despite Tesla CEO Elon Musk buying it, saying "Twitter has become very boring". Trump said that he will not return to Twitter and will instead use his own 'TRUTH Social' as the only social media platform. Jeff Bezos Tests Elon Musk’s ‘Free Speech’ Commitment, Raises Question Over Chinese Influence.

"I am not going on Twitter, I am going to stay on TRUTH. I hope Elon makes improvements to it and he is a good man, but I am going to be staying on TRUTH," Trump was quoted as saying in a Fox News report late on Monday.

Trump said he will begin "TRUTHing" over the next week. The former President announcement came moments after Musk won a takeover bid to take Twitter private for $44 billion at $54.20 a share.

"I hope that even my worst critics remain on Twitter, because that is what free speech means," Musk had tweeted.

(The above story first appeared on LatestLY on Apr 26, 2022 10:50 AM IST. For more news and updates on politics, world, sports, entertainment and lifestyle, log on to our website latestly.com).