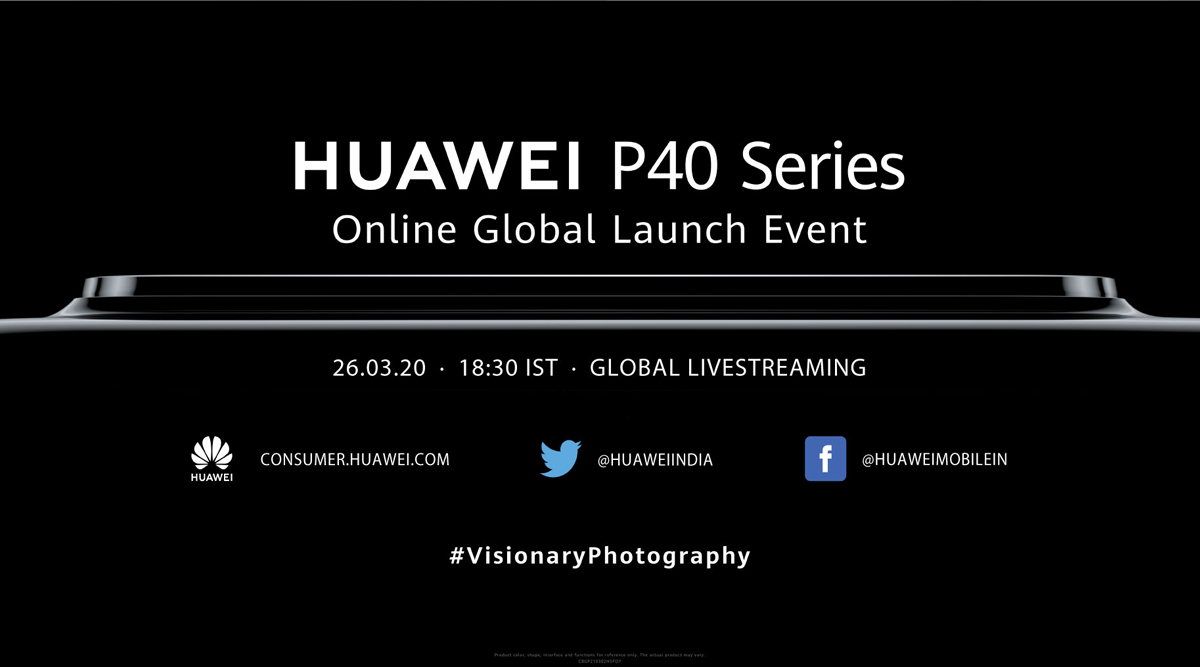 Huawei's new flagship smartphone series - Huawei P40 series will be officially launched in the global market today. The company is expected to introduce two variants under the P40 series - P40 and P40 Pro. Some rumours also hint that the company could also launch P40 Pro+ as a part of the P40 range. The launch event will be entirely online event, because of the Coronavirus Pandemic that has impacted the globe. All the phones from Huawei under the upcoming P40 series will get pill-shaped hole-punch display along with multi-camera rear module. Huawei P40 Series Smartphones To Make Global Debut Tomorrow; Expected Prices, Features & Specifications.

The Huawei P40 series will replace Huawei's P30 family that was introduced last year. The live streaming of the launch event is scheduled to commence today at 6:30 pm IST via Huawei's official website. You can watch the launch event live through the embedded link below. Apart from the regular Huawei P40 smartphone, the company might launch Huawei P40 Pro and P40 Pro+. Additionally, the company could also use this platform to announce its plans about the Huawei App Gallery that rivals Google Play.

As far as the specifications are concerned, the Huawei P40 will get a 6.1-inch FHD+ display with by an octa-core HiSilicon Kirin 990 SoC, paired with up to 8GB of RAM. The handset is likely to be equipped with a triple rear camera setup comprising a 50MP Sony sensor, 16MP secondary sensor, and an 8MP tertiary sensor. For selfies, there is will be a 32MP single selfie camera upfront. Huawei P40 is expected to run Android 10 out-of-the-box with an Huawei Mobile Services (HMS) on the top. The phone will be backed by a 3,800mAh battery supporting 22.5W fast charging. Huawei Mate 40 Pro Likely To Feature A Halo Ring Touch Display: Report.

Coming to Huawei P40 Pro, the smartphone is likely to sport a 6.58-inch FHD+ AMOLED display with resolution of 1,200x2,640 pixels and refresh rate of 90Hz. The device will be powered by an octa-core Kirin 990 SoC, that will be paired with up to 8GB of RAM. For photography, there will be a quad rear camera module at the back comprising of 50MP UltraVision primary sensor, 40MP secondary sensor, 12MP tertiary sensor, and a 3D time-of-flight (ToF) depth sensor.

For selfies, the phone will pack a 32MP primary sensor at the front with a depth sensor featuring 50X SuperSensing Zoom. The smartphone is likely to be offered with three storage configurations - 128GB, 256GB and 512GB. The phone will be fuelled by a bigger 4,200mAh battery with 40W fast charging as well as wireless charging technology.