In recent years, generating income using cryptocurrencies secured by blockchain technology has become highly prevalent and well-liked. Initial investments may have returned gains several times the amount invested—it all depends on the trajectory and worth of the cryptocurrency. 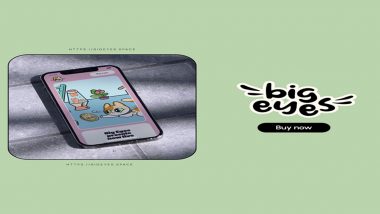 In recent years, generating income using cryptocurrencies secured by blockchain technology has become highly prevalent and well-liked. Initial investments may have returned gains several times the amount invested—it all depends on the trajectory and worth of the cryptocurrency.

Since the introduction of cryptocurrency in 2009, a significant number of tokens and platforms have been developed. These include platforms that provide opportunities for purchasing cryptocurrencies, such as Big Eyes Coin (BIG) and ApeCoin (APE), which, in turn, generate opportunities for making financial gains through investing. BitcoinCash 22: The Electronic Cash Conference To Be Held in St Kitts and Nevis on November 12.

ApeCoin (APE) was designed to serve as a token that will support the controlled community and help ensure future success. This protocol would provide a decentralized system for metaverse communities.

The Ape Foundation is the Apecoin's, and together they form a more robust structure than the ApeCoin DAO's holders could ever hope to achieve on their own.

Its purpose is to encourage the healthy growth of the APE ecosystem in an equitable manner. It also uses the ecosystem fund, which facilitates collaboration between ApeCoin (APE) holders via open-governance mechanisms.

As an incentive for Bored Ape Yacht Club NFT collection owners, ApeCoin (APE) was developed as an Ethereum-based utility coin (BAYC). Even though ApeCoin (APE) does not now have a predetermined value, its connection to a non-fungible token (NFT) fund can be considered a valuable meme token. Experts have high hopes that it will explode in value over the next few weeks, and 62% of ApeCoin (APE) will be contributed to the ecosystem fund. Apple Likely To Add Exclusive Features to Upcoming iPhone 15 Pro Max.

Tokenized as "BIG," Big Eyes Coin's (BIG) goal is to preserve value while transferring assets from the DeFi ecosystem to the fintech network. By giving away 5 percent of its profits to marine-focused nonprofits, BIG hopes to contribute to the preservation of the ocean's environment.

BIG has a solid design team to back up its status as a meme token with increasing use in the economy's influencer and celebrity circles. At the time of its introduction, BIG hopes to have at least 90% of its 200 billion tokens available.

There are no transaction fees or taxes associated with Big Eye Coin (BIG), and the coin can be used to purchase various digital and physical goods, including those from the Big Eye Coin store.

The tokenomics design of this project allows for its steady growth over many years while also satisfying the needs of potential investors. Presently in its second presale round, Big Eyes Coin has only two more phases left before its whole supply is sold out.

The Big Eyes crew is now hosting a giveaway for $250,000. Follow this link for a chance to win some of it.

Big Eyes anticipates having roughly $2 million in the bank after the first week of the presale. The business plans to increase the price of its token by 25% at the end of the second week.