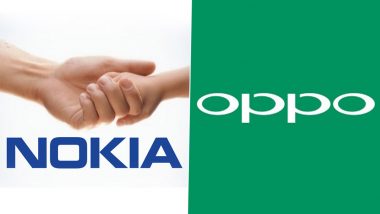 New Delhi: Finnish telecommunications company Nokia has filed numerous patent infringement complaints against smartphone brand OPPO regarding standard-essential patent (SEP) and non-SEP patents, the media reported. According to GSMArena, these patents are about connectivity, interface and security features and the complaints are filed in European and Asian markets. Smartphone brands OPPO and Nokia had signed a multi-year licensing agreement back in 2018 and it appears that the contract is over, the report said. Nokia C30 Renders & Specifications Reportedly Tipped Online.

The Finnish telecommunications company put out an official statement that OPPO has rejected the offer of renewing the contract so it had to take legal actions since Oppo continues to use those patents. Media reports said that OPPO found Nokia's action "shocking" and accused it of dishonouring the patent licensing under fair, reasonable, and non-discriminatory (FRAND) terms.

"OPPO respects and protects its own and third-party intellectual property rights, and has been committed to benign patent licensing cooperation in the industry. OPPO opposes unreasonable consultations such as using litigation as a tool," the smartphone company said.

The spokesperson for Nokia "believes that there is still a more constructive way to deal with the situation". Nokia has quite a lot of patents up its sleeve and has signed royalty-bearing agreements with Samsung, Apple, LG, Lenovo and even Blackberry, the report said.

Both the companies have not revealed how closely they would integrate. A new leaked memo has disclosed that OnePlus will become OPPO's sub-brand.

(The above story first appeared on LatestLY on Jul 13, 2021 05:41 PM IST. For more news and updates on politics, world, sports, entertainment and lifestyle, log on to our website latestly.com).