Here's a detailed comparison between the newly launched OnePlus 7 Pro and OnePlus 7 based on features, specifications and pricing. 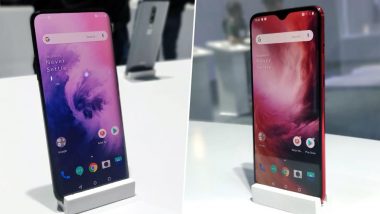 OnePlus India on Tuesday surprised everyone with an attractive pricing of OnePlus 7. The company made the new OnePlus 7 more affordable than the predecessor, which was launched late last year at Rs 37,999. Answering to its community and maintaining its 'flagship killer' tag, the Chinese phone decided to launch the OnePlus 7 at Rs 32,999. The company also launched OnePlus 7 Pro, a true premium flagship smartphone with an affordable pricing of Rs 48,999. However, the company also launched the new generation Bullet Wireless 2.0 Earbuds in India at Rs 5,990. But the question here is how different OnePlus 7 Pro is from OnePlus? Let's find it out. OnePlus 7 Pro, OnePlus 7 & Bullet Wireless 2.0 Earbuds Launched: Specs, Features & Price in India.

Display: The main underline of OnePlus 7 Pro is a 6.7-inch Fluid AMOLED display screen with edged design. Offering an aspect ratio of 19.5:9, the handset offers resolution of 3120x1440 pixels along with pixel density of 556 ppi. To make the viewing experience better for the users, the company introduced a display with a 90 Hz refresh rate. OnePlus 7 comparatively gets the same 6.41-inch Optic AMOLED display screen with a waterdrop notch that was offered on OnePlus 6T.

Features: Coming to the features, OnePlus 7 Pro is the most feature-loaded of the pack. Enhancing the overall audio experience, OnePlus has introduced dual audio speakers on OnePlus 7 with Dolby Atmos and noise cancellation support. Both the devices carry in-display fingerprint scanner and face unlock features as unlocking options. Moreover, the Chinese phone maker introduced UFS 3.0 technology on OnePlus 7 Pro making the storage faster than the predecessors.

Camera: Coming to the optics, the OnePlus 7 continues to sport vertically aligned dual rear camera. However, the sensors on offer at different. The handset employs a 48MP SONY IMX586 sensor along with a 5MP secondary shooter. The waterdrop notch upfront houses the 16MP Sony IMX471 selfie camera with f/2.0 aperture. Unlike OnePlus 7, the bigger OnePlus 7 Pro smartphone gets a vertically aligned triple camera at the back. The module comprises of 48MP main lens along with an 8MP telephoto lens and a 16MP ultra-wide sensor. At the front, the OnePlus 7 Pro too gets a 16MP selfie camera. OnePlus 7 Pro, OnePlus 7 Flagship Smartphones Launched in India at Rs 48,999 & Rs 32,999: Key Facts to Know.

Processor: Both the smartphones come powered by Snapdragon 855 SoC, which is the latest flagship offering from Qualcomm. The chipset on the new OnePlus 7 Series is clubbed with Adreno 640 GPU for excellent user experience. The processor on OnePlus 7 is mated with up to 8GB of RAM whereas it comes clubbed with up to 12GB on the OnePlus 7 Pro.

Variants: The top-end model of OnePlus 7 Series will be made available in three versions depending on the storage configurations. The variants are 6GB RAM + 128GB, 8GB + 256GB and 12GB + 256GB. On the other hand, OnePlus 7 is offered in two storage configurations only - 6GB + 128GB and 8GB + 256GB. It is important to note that the devices don't get external memory expansion provision.

Battery:  This is another aspect where OnePlus has been focusing with the new generation OnePlus devices. The phone maker increased the battery capacity on OnePlus 7 Pro to 4000 mAh. However, the OnePlus 7 borrowed its battery from the predecessors, featuring a 3700 mAh of capacity.

(The above story first appeared on LatestLY on May 15, 2019 03:13 PM IST. For more news and updates on politics, world, sports, entertainment and lifestyle, log on to our website latestly.com).