The Narzo 20 series was announced at the IFA 2020 in Berlin earlier this month. The series will include three devices - Narzo 20A, Narzo 20, and Narzo 20 Pro. 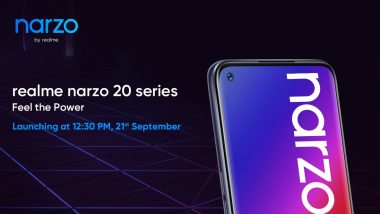 New Delhi, Sep 14: Chinese smartphone maker Realme on Monday announced that the new 'Narzo 20' series will debut in India on September 21. The Narzo 20 series was announced at the IFA 2020 in Berlin earlier this month. The series will include three devices - Narzo 20A, Narzo 20, and Narzo 20 Pro. Realme 7 Pro & Realme 7 Smartphones Launching Today in India at 12:30 PM IST, Watch LIVE Streaming of Realme’s Event.

"Continuing the legacy of Realme Narzo 10 series, the Realme Narzo 20 series is for all young players with best-in-class segment gaming processor and trend-setting design," the company said in a statement.

Take control with the #WheelOfPower⚡

Crack the tagline of our upcoming product before we reveal it and stand a chance to win one of the phones from #realmeNarzo20series.

Hint: Dash, Race and Bolt are some of the synonyms of the missing word.

The Realme Narzo 20 series will succeed the Narzo 10 and Narzo 10A, launched earlier this year. Realme Narzo 20A is expected to come in two variants -- 3GB RAM+32GB storage and 4GB RAM+64GB storage. It will come in victory blue and glory silver colour options.

(The above story first appeared on LatestLY on Sep 14, 2020 04:34 PM IST. For more news and updates on politics, world, sports, entertainment and lifestyle, log on to our website latestly.com).