The upcoming phone has been spotted on Google Play Console ahead of its launch. The listing has revealed key details and specifications. 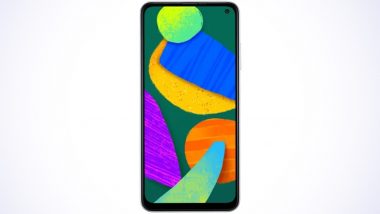 Samsung is planning to launch a new smartphone under its popular F series. The new upcoming phone is likely to be called the Galaxy F52 G. The upcoming phone has been spotted on Google Play Console ahead of its launch. The listing has revealed key details and specifications. Samsung Galaxy M42 5G Launched in India Starting at Rs 21,999.

As per the Google Play Console listing, the upcoming Galaxy F52 5G will get an FHD+ display with a resolution of 1080×2009 pixels. It will also feature a punch-hole cutout for the selfie camera. Under the hood, there will be an octa-core Qualcomm Snapdragon 750G chipset, which will be paired with up to 8GB of RAM.

For photos and videos, there could be a 64MP primary main camera. The front snapper is likely to be a 16MP shooter for selfies and video calls. It is tipped to get a 4350mAh battery capacity with 25W fast-charging support. It is expected to run Android 11 out of the box with OneUI 3.1 skin.

(The above story first appeared on LatestLY on Apr 29, 2021 08:49 PM IST. For more news and updates on politics, world, sports, entertainment and lifestyle, log on to our website latestly.com).