Arctic Fox Covers Distance Of 3,500 Kms From Norway to Canada in 76 Days! Sets Record For Fastest Movement Ever Seen in The Species 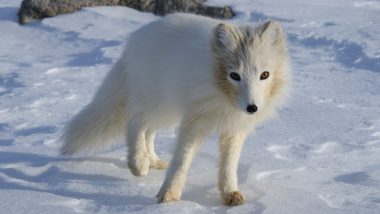 An Arctic fox has left scientists baffled as it walked a distance of 3,500kms from Norway to Canada in less than 80 days! A subject of research, the female fox was fitted with a tracking device. And the findings have left the scientists shocked, as the fox arrived in Canada on July 1 within 76 days. The fox left Spitsbergen in Norway’s Svalbard archipelago on March 26, last year. The animal's epic trek has left the people at the institute in shock as the animal set a record for the fastest and longest journey for the species. What The Fox! London Family Surprised to See a Fox Sleeping on Their Microwave, View Pic.

Researchers at the Norway Polar Institute fitted a year old female fox with a GPS tracking device and freed her into the wild. The fox, in search of food reached Greenland, in 21 days. It continued its journey and reached the Ellesmere Island in Canada on Monday. Researcher Eva Fuglei who tracked her said she could not believe it was true. The study has bee now recorded as a research paper titled "One female’s long run across sea ice." It mentions the Arctic fox's journey as the longest ever recorded. Starving Polar Bear Strays into Norilsk, Russia Hundreds of Kms Away From Natural Habitat; Heart-Breaking Pic Goes Viral.

Check Picture of the Arctic Fox Who Covered the Long Journey:

At one point while tracking the fox, the researchers thought that the device was removed from the animal and taken onboard a boat. "But no, there are no boats that go so far up in the ice. So we just had to keep up with what the fox did," Fuglei was quoted to Norway's NRK public broadcaster. On average, the female fox moved at an average of 46.3km per day. While crossing the ice sheet in Greenland, it covered 155km in one day!

The Norwegian Institute for Nature Research tracks foxes to see how they cope up with changes in the season at the Arctic. The Arctic foxes are known to migrate in winters to search for food. The fox took two major breaks in her journey, which the scientists predict could be due to bad weather, or must have found a source of food in the sea birds. However, this particular one went very far and in such a short span of time. Fuglei calls it 'an exceptional capacity of this little creature'.

(The above story first appeared on LatestLY on Jul 02, 2019 07:47 PM IST. For more news and updates on politics, world, sports, entertainment and lifestyle, log on to our website latestly.com).