A conspiracy theorist claimed that he had spotted at least "10 unidentified flying objects (UFOs)" hovering around the International Space Station (ISS) during a NASA live stream on July 3. According to the conspiracy theorist, the video captured the UFOs forming a circle around the ISS above the Southern Atlantic Ocean. 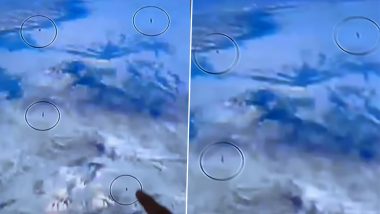 Conspiracy theorist claimed to have spotted a fleet of 10 UFOs near InternationalSpace Station (Photo Credits: YouTube/Screengrab)

Washington, July 12: The mystery about the existence of aliens deepens after a conspiracy theorist claimed that he had spotted at least "10 unidentified flying objects (UFOs)" hovering around the International Space Station (ISS) during one of NASA's live streaming video. These objects were reportedly noticed by the man named Jeff while watching the live streaming on July 3 at around 8:30 am EST. He believed that the live streaming video had captured as many as 10 UFOs. Are Aliens Coming? US Navy Pilots Claims to Spot UFOs Daily Between 2014-15 Over East Coast.

According to the conspiracy theorist, "orb-like" objects were moving past the camera during the live streaming.  Jeff believed that the video captured the UFOs forming a circle around the ISS above the Southern Atlantic Ocean. However, till now, NASA has not issued any official statement about the sighting. The footage is being shared widely on social media.

According to a UK-based website unilad.co.uk, Jeff shared the screenshot of the objects with a youtuber named Michael as he was unable to find out explanation. Michael shared the first screenshot of the "orb-like" objects on his YouTube channel "Mr. MBB33". Do UFO and Aliens Exist? Final Report by US Intelligence Does Not Rule Out Possibility of Extraterrestrial Spacecraft, Says Only One of 144 Sightings Can Be Explained.

He wrote, "Observation made by Jeff who saw these strange objects from the ISS onboard live camera on July 3, 2021, at 8:30 am EST. He took several screenshots once he noticed the dark objects. There were approximately 10 visible objects in this screengrab, may have been more." Notably, social media users are coming up with numerous explanations about the objects. Some even believe that these objects were part of the US Space force, which was formed by former President Donald Trump. Some even believe that the objects could be was a part of the Starlink satellite network of Elon Musk.

Last month, the United States released an unclassified report on sightings of UFOs. The much-awaited final US intelligence report on UFO sightings, called "Preliminary Assessment: Unidentified Aerial Phenomena'" said only one of 144 UFO sightings between 2004 and 2021 could be explained with "high confidence". The report neither confirmed nor rejected possibilities of alien origin behind UFO sightings.

(The above story first appeared on LatestLY on Jul 12, 2021 11:29 PM IST. For more news and updates on politics, world, sports, entertainment and lifestyle, log on to our website latestly.com).