This PolarGAP project was thus designed to fill in the gaps in the satellite data coverage of the South Pole. It was specifically to acquire the missing gravity data. 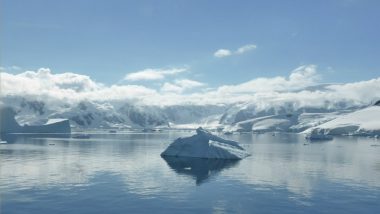 The Antartica ice has unveiled a new treasure of sorts for researchers. They have found mountain ranges and about three huge, deep subglacial valleys hidden beneath the Antartica ice. These findings have been published in the journal Geophysical Research Letters, and are the first ones to emerge from the extensive ice penetrating radar data collected in Antarctica. This was a part of the European Space Agency PolarGAP project.

There is extensive satellite data which helps to observe the surface of the Earth and its deep interior. But there was some gap around the South Pole area, which was not covered by the satellites due to the inclination of their orbits. This PolarGAP project was thus designed to fill in the gaps in the satellite data coverage of the South Pole. It was specifically to acquire the missing gravity data. They also collected data to enable mapping of the topography beneath the surface of the ice.

This data has revealed how topography controls the flow of the ice between the East and West Antarctic ice sheets. The team was led by researchers from Northumbria University in the UK and they found out three vast subglacial valleys in West Antarctica. These valleys play a vital role as they help in channelling the flow of the ice from the center of the continent towards the coast. With climate change and growing heat, the ice sheets will start thinning. These troughs in the topography will increase the speed at which the ice flows and from the centre of Antarctica to the sea, fuelling a rise in the sea levels. The largest valley is known as the Foundation Trough is more than 350 kilometres long and 35 kilometres wide. Lengthwise it is almost the distance from London to Manchester. The width is more than one and a half times the length of New York's Manhattan Island. UFO Found in Antarctica? The Google Earth Picture is Just a Natural Phenomenon

The other two troughs are also equally vast. The Patuxent Trough is more than 300 kilometres long and over 15 kilometres wide. The third called the Offset Rift Basin is 150 kilometres long and 30 kilometres wide. "As there were gaps in satellite data around the South Pole, no one knew exactly what was there, so we are delighted to be able to release the very first findings to emerge from the PolarGAP project," Kate Winter, a research fellow at Northumbria University. The researchers have found that the mountainous region is preventing ice from East Antarctica flowing through West Antartica to the coast. "If the ice sheet thins or retreats, these topographically-controlled corridors could facilitate enhanced flow of ice further inland, and could lead to the West Antarctic ice divide moving," she said.

Fausto Ferraccioli, principal investigator of the European Space Agency PolarGAP project says, "Our new aerogeophysical data will also enable new research into the geological processes that created the mountains and basins before the Antarctic ice sheet itself was born." These findings give a key into an understanding of how the East Antartica ice sheet may have responded to the past changes and how it will in the future. The world of Antartica does have a lot to offer and with the latest findings, it sheds more light on the past as well as the future especially in reference to the global warming.

(The above story first appeared on LatestLY on May 28, 2018 11:45 PM IST. For more news and updates on politics, world, sports, entertainment and lifestyle, log on to our website latestly.com).