NASA Offers Rs 7.5 Lakh to Engineering Students to Help Them Harvest Water on Moon and Mars, Here's How to Apply 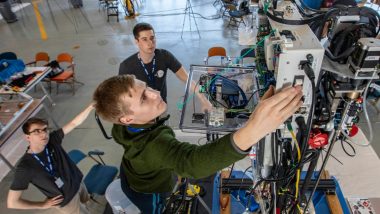 New Delhi, August 15: US-based space agency NASA has invited engineering students to join its mission to harvest water on Moon and Mars. Under the programme, titled '2021 Moon to Mars Ice and Prospecting Challenge', ten teams will be shortlisted and given a $10,000 development stipend (approximately 7.5 lakh) to build and test their proposed systems to identify water reserves in space over a period of six months. NASA Removes 'Insensitive' Nicknames Attached to Celestial Bodies, 'Eskimo Nebula' and 'Siamese Twins Galaxy' First to Go.

"NASA is giving university-level engineering students a unique opportunity to participate in the quest to harvest water on the Moon and Mars," the space agency said in a statement. "Water is essential for extended lunar and Mars expeditions, whether astronauts drink it, grow plants with it, or make rocket propellant from it. But water is also heavy and expensive to bring from Earth," it added. NASA further stated that water mapping technology is being used to understand how water reserves in space could be utilised. NASA Sounding Rocket Finds Helium Structures in Sun's Atmosphere.

"That’s why the 2021 Moon to Mars Ice and Prospecting Challenge is asking eligible undergraduate and graduate student teams to design and build hardware that can identify, map, and drill through various subsurface layers, then extract water from an ice block in a simulated off-world test bed," NASA said. Selected teams will focus on harvesting as much water as possible from simulated slices of lunar and Martian surfaces.

Each team will also identify critical differences between operations on Earth versus the Moon and Mars, and describe essential modifications needed for each in this "path-to-flight" description for their prototypes. Interested teams must submit a project plan detailing their proposed concept design and operations by Nov. 24, 2020. Up to 10 teams will be selected in December. Click here to know more about how to apply and last dates for submission.

(The above story first appeared on LatestLY on Aug 15, 2020 12:55 PM IST. For more news and updates on politics, world, sports, entertainment and lifestyle, log on to our website latestly.com).