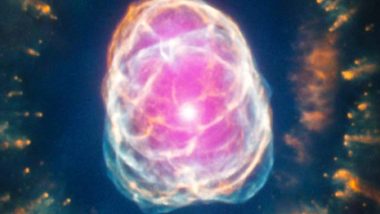 Washington, August 9: In order to address apprehensions related to cultural hegemony, the National Aeronautics and Space Administration (NASA) decided to begin removing "insensitive" nicknames attached to celestial bodies. The space group will axe out those nicknames which are entirely - or those whose prefix or suffix - point towards racism, colonialism or other dark phases of human history.

The first among the nicknames that would be dropped include "Eskimo Nebula" and “Siamese Twins Galaxy”. The latter refers to the  NGC 4567 and NGC 4568, a pair of spiral galaxies found in the Virgo Galaxy Cluster. NASA Sounding Rocket Finds Helium Structures in Sun's Atmosphere.

Eskimo Nebula, on the other hand, is the nickname used for referring to to planetary nebula NGC 2392. The word "Eskimo" carries a negative connotation as it is commemorative of the time period when the native population in Arctic region was colonised.

"I support our ongoing reevaluation of the names by which we refer to astronomical objects," said Thomas Zurbuchen, associate administrator of NASA’s Science Mission Directorate at Headquarters, Washington.

“Our goal is that all names are aligned with our values of diversity and inclusion, and we’ll proactively work with the scientific community to help ensure that. Science is for everyone, and every facet of our work needs to reflect that value," he was further quoted as saying in a statement issued on Wednesday by the space body.

For referring to cosmic objects, the NASA initially assigns a technical name -- which is a combination of letters and numbers in English. Subsequently, the nicknames are designated for better remembrance among the masses.

"Nicknames are often more approachable and public-friendly than official names for cosmic objects, such as Barnard 33, whose nickname 'the Horsehead Nebula' invokes its appearance. But often seemingly innocuous nicknames can be harmful and detract from the science," the NASA statement added.

"These nicknames and terms may have historical or culture connotations that are objectionable or unwelcoming, and NASA is strongly committed to addressing them," said Stephen T. Shih, Associate Administrator for Diversity and Equal Opportunity at NASA Headquarters.

"Science depends on diverse contributions, and benefits everyone, so this means we must make it inclusive," he added. The Agency will be working with diversity, inclusion, and equity experts in the astronomical and physical sciences to provide guidance and recommendations for other nicknames and terms for review.

(The above story first appeared on LatestLY on Aug 09, 2020 11:44 PM IST. For more news and updates on politics, world, sports, entertainment and lifestyle, log on to our website latestly.com).