Since the Hubble Telescope can capture both visible and ultraviolet light, the LEGUS team has got some extraordinary images of the universe. 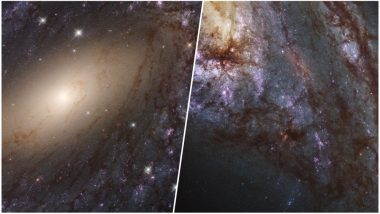 Our universe is an incredible space, something we haven't really got to observe much. We often admire the stars and the faint milky way which we can see through the remote areas of darkness from the Earth, but there is a lot more than what meets the eye. And given a most comprehensive look into the galaxy is NASA's Hubble Space Telescope. A team of astronomers have released some latest pictures which show the star formations in the wide galaxy out there.

The researchers for a better understanding have combined the new Hubble observations along with some of the archives for giving a vast look into the complexities that are involved in the formation of a star. These images also give a look into galaxy evolution. To study the formation in more detail a group of researchers had launched the project Legacy ExtraGalactic UV Survey (LEGUS). Since the Hubble Telescope can capture both visible and ultraviolet light, the LEGUS team has got some extraordinary images of the universe. The data collected also gives detailed information on young, massive stars and star clusters. It also shows how the environment affects their development.

Check out the new images released from Hubble Space Telescope:

Capitalizing on the unparalleled sharpness and spectral range of #Hubble, an international team of astronomers is releasing the most comprehensive, high-resolution ultraviolet-light survey of nearby star-forming galaxies: https://t.co/iGHYcrwQ8H pic.twitter.com/2PcwDq5MmN

The overlaying of the new and the old images gave a never seen before clarity which only facilitates better research. "There has never before been a star cluster and a stellar catalog that included observations in ultraviolet light,” explained survey leader Daniela Calzetti of the University of Massachusetts, Amherst. “Ultraviolet light is a major tracer of the youngest and hottest star populations, which astronomers need to derive the ages of stars and get a complete stellar history. The synergy of the two catalogs combined offers an unprecedented potential for understanding star formation.”

(The above story first appeared on LatestLY on May 19, 2018 08:59 PM IST. For more news and updates on politics, world, sports, entertainment and lifestyle, log on to our website latestly.com).