Uranus to Appear Between Mars and Moon Tonight! Here’s How to Watch the Rare Celestial Event

Uranus shines at the edge of naked-eye visibility, especially in areas with light pollution, so it is notoriously hard to view. But with a telescope or binoculars, you should be able to spot it. In this article, we bring you more about the rare celestial occurrence. 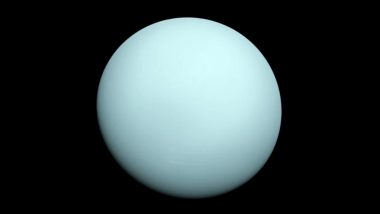 We have been fortunate enough over the past days to be able to view some of the rarest celestial occurrences. 2021 has a lot of astronomical events, and the latest one in the series is Uranus making a rare appearance in the sky. The seventh planet from the Sun will be between Mars and the crescent moon. Astronomy enthusiasts can get a glimpse of the ice giant tonight. Uranus shines at the edge of naked-eye visibility, especially in areas with light pollution, so it is notoriously hard to view. But with a telescope or binoculars, you should be able to spot it. In this article, we bring you more about the rare celestial occurrence.

In November, 2020, seven planets were visible in the sky.  Planets such as Venus, Jupiter, Saturn and Mars get a lot of attention from the stargazers. They are generally bright and pretty easy to spot. But distant planets such as Uranus only make rare appearances for skygazers to be able to spot it in the sky. NASA calls it an ‘easy opportunity,’ to view Uranus. It is going to have a close pass with the moon and Mars that night. At some places, people have already spotted the seventh planet, between the moon and mars, sharing pictures on Twitter.

Moon and mars with Uranus pic.twitter.com/FGLnZ4ReKb

How to Spot Uranus?

The best way to find it is to look at the moon and Mars. They will help guide your eyes to spot Uranus in the night sky. “Scan your way over from Mars toward the moon, and you should be able to find the faint, bluish disk of Uranus,” explains NASA. Uranus will be a little below and a little to the left of Mars. While you see the tiny dot in the sky near Mars, use binoculars or a telescope, you will see the blue tint when you look at the planet.

So, what are you waiting for? Head outside, and catch the rarest glimpse. While you are gazing into the blue planet, be thankful you are at a far distance from Uranus. It turns out; the planet smells like farts and rotten eggs because of the hydrogen sulfide gas in its clouds.

(The above story first appeared on LatestLY on Jan 21, 2021 12:50 PM IST. For more news and updates on politics, world, sports, entertainment and lifestyle, log on to our website latestly.com).