Celestial Event Calendar of 2021: From Meteor Showers, Lunar and Solar Eclipses to Planetary Conjunctions, Know All Important Astronomical Occurrences of This Year

Come 2021 this new-sparked interest in Astronomical wonders are bound to increase and so we have curated a Celestial Events Calendar 2021 that captures the top 10 astronomical events that you need to mark on your 2021 Calendar! 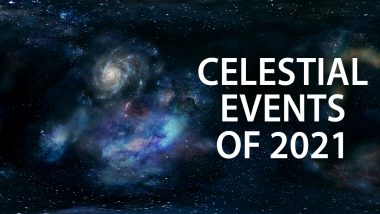 We have welcomed the New Year with all the hope and energy, and believe that it will be a better year overall. Despite all the challenges and curveballs that have been thrown at us in 2020, there have been moments that truly brought out the beauty of the world. Whether it was seeing a more empathetic world coming together to fight for what is right or merely experiencing the awe-inspiring spectacle that was Great Conjunction 2020 where Jupiter and Saturn came together, 2020 has had its fair share of exciting moments. And most of it has been thanks to Celestial Events. Come 2021 this new-sparked interest in Astronomical wonders are bound to increase and so we have curated a Celestial Events Calendar 2021 that captures the top 10 astronomical events that you need to mark on your 2021 Calendar!

There is nothing quite like bringing in the New Year with a spectacular celestial event. The Quadrantids Meteor Shower is touted to be one of the best annual meteor showers and comes from the dust of asteroid 2003 EH1 each January, and usually produces as many as 200 shooting stars. While the brightness of the full moon might tone down the shower, it will be a spectacle nonetheless.

A super cool cosmic huddle will greet us in March when Mercury, Jupiter, and Saturn will all appear in near-perfect alignment. In fact, with the right binoculars, stargazers will once again be able to see Jupiter’s four largest moons at this event.

The Lyrids is an average shower, usually producing about 20 meteors per hour at its peak. It is produced by dust particles left behind by comet C/1861 G1 Thatcher, which was discovered in 1861. The shower runs annually from April 16-25.

The beauty of an eclipse is never lost on astronomy lovers. 2021 will have its first total lunar eclipse on May 26 when people across western North America, western South America, Australia, and Southeast Asia will be able to witness a blush red moon and witness it undergo a total lunar eclipse!

The Solar Eclipse on June 10 will be visible to anyone living in a narrow path running north from Canada, into part of Greenland, and into Russia. This annual solar eclipse will appear like a Ring of Fire as the lunar disk aligns perfectly between the earth and sun to only leave a halo of sun’s light around. Ring of Fire 2020 Sighted! Check Beautiful Pics of The Surya Grahan on Celestial Event of Annular Solar Eclipse.

Similar to the recently witnessed great conjunction, the Venus-Mars Conjunction is sure to be an exciting astronomical event. While Mars may appear slightly fainter, Venus is sure to shine bright on July 12, just after sunset and can be captured as it joins a quaint crescent moon to create a celestial spectacle!

The Perseid Meteors Peak is an annual phenomenon which occurs when the Earth travels through a cloud of debris shed by the comet Swift–Tuttle. With the ability to produce up to 60 shooting stars an hour, this meteor shower is a sight to behold!

August 18th: A Close Conjunction of Mars and Mercury.

Just as the sun sets on August 18, the closest planet to it, Mercury and Mars will create a conjunction that needs to be witnessed. While spotting this coming together might be tricky, since it is so close to the Sun, a telescope should help stargazers to capture this moment.

The Draconid Meteor Shower is all set to sparkle the high northwest skies with 10 to 15 shooting stars an hour. Since the moon will only be a small sliver, this meteor shower will be easier to spot.

November 19 will bring with it the last lunar eclipse of the year. This partial lunar eclipse can be witnessed across North and South America, Australia, and parts of Europe and Asia. although it is said to be a partial eclipse, the fact that 95% of the full moon will be cast within Earth’s dark shadow, making it appear like a total eclipse for some time.

We hope that you get on some exciting plans to witness these Celestial events and celebrate 2021 to the most! Happy New Year!

(The above story first appeared on LatestLY on Jan 03, 2021 10:41 AM IST. For more news and updates on politics, world, sports, entertainment and lifestyle, log on to our website latestly.com).