The bee vaccine which is still under process, will be administered via an edible sugar patty in the hive, which the queen will consume over the course of about a week. 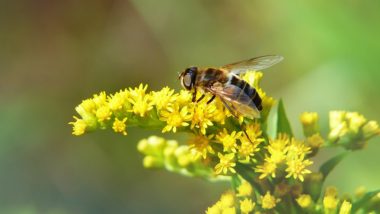 Honey bees are dying at an alarming rate. And there is no single cause to it. According to scientists, the queen bees are at threats because of a combination of factors that include parasites, pathogens, pesticides, poor nutrition and habitat loss. In a bid to fight with the said factors, scientists at the University of Helsinki, Finland have developed the first ever edible vaccines against microbial infections, hoping to save at least a few of the pollinators. The main aim is to save the bees from the infamous American foulboard, a globally spread disease that can potentially kill entire colonies. Do Bees Understand Math Better Than Humans? The Insects Can Grasp The Concept of Zero Better Than We Can.

The bee vaccine which is still under process, will be administered via an edible sugar patty in the hive, which the queen will consume over the course of about a week. Once ingested, the pathogens in the patty will pass to the bees’ eggs, “where they work as inducers for future immune responses,” the university explained in a statement. However, the scientists are yet to assure if the vaccine is safe for the environment, the bees themselves and humans who consume the honey. Dalial Freitak, one of the University’s scientists who also worked to create the vaccine said, “Now we've discovered the mechanism to show that you can actually vaccinate them. You can transfer a signal from one generation to another.” Honey Bee Stings Kill One and Injure Two Others At Mumbai's Veer Savarkar Garden.

The idea of this new weapon has generated excitement in the beekeeping community, farmers and advocates for pollinators, who have watched one of the world’s most important insects to struggle in recent decades. The new vaccine is undergoing safety tests. Once ensure with its safety, it could represent a breakthrough in the protection of bees.

(The above story first appeared on LatestLY on Dec 08, 2018 03:10 PM IST. For more news and updates on politics, world, sports, entertainment and lifestyle, log on to our website latestly.com).