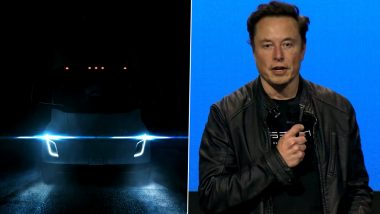 The Austin, Texas, company formally delivered the trucks at a factory near Reno, Nevada. The event was livestreamed on Twitter, which Musk now owns. Tesla Car Crash Video: Model Y Takes Off at High Speed While Trying To Park in China, Swerves and Crashes After Killing Two People; CCTV Footages Go Viral.

Musk drove one of three Tesla Semis in front of a crowd inside the factory. One was white, one was painted with a Pepsi logo, and another with Frito-Lay colors.

PepsiCo, which is based in Purchase, New York, is taking part in a zero-emissions freight project at a Frito-Lay facility in Modesto, California. That project is being funded by a USD 15.4 million clean-freight technology grant from the California Air Resources Board that includes 15 Tesla battery-electric tractors and other electric- and natural-gas powered trucks. UK: Rising Cost of Living Forces British Families To ‘Eat Pet Food, Heat Meals on Radiator’; Real Food Become Unaffordable For Many.

Electric semis also would be eligible for a federal tax credit of up to USD 40,000. At an event in November of 2017 unveiling the Tesla Semi, Musk said production would begin in 2019 and the trucks would be able to follow each other autonomously in a convoy. But during Tesla's third-quarter earnings conference call in October he said the company's “Full Self Driving” system is not quite ready to be driverless.