Egyptian security forces pressing a campaign against Islamist militants have killed 52 suspected jihadists in the Sinai Peninsula in operations in which three soldiers also died, the army said Monday. 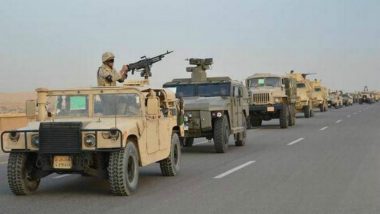 The military launched a sweeping operation in February focused on the Sinai in eastern Egypt aimed at wiping out jihadists, including from the Islamic State (IS) group, who have been waging a bloody insurgency.

On Monday, the military said that 53 "takfiris" or Sunni Muslim extremists were killed in two separate operations by security forces in the restive peninsula. Three members of the armed forces were also killed in these operations, it said in a statement, without stating when they took place.

The military has regularly reported operations in the Sinai since it launched the campaign. According to official figures, a total of more than 350 suspected jihadists and at least 30 soldiers have been killed in the "Sinai 2018" campaign. US-led Strikes Kill 28 Jihadists in Eastern Syria: Monitor.

Security sources said last week that local IS leader Abu Hamza al-Maqdisi had been killed in an air raid on the Sinai. The jihadist group confirmed his death. Jihadists have killed hundreds of police officers and soldiers in the Sinai since the army ousted Egypt's Islamist president Mohamed Morsi in 2013.