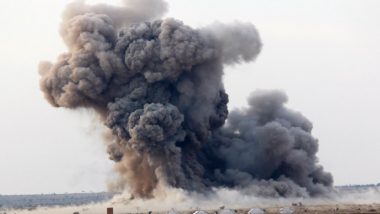 Kabul, October 18:  At least 16 people were killed and 90 others injured after a powerful explosion on Sunday rocked the city of Firoz Koah, capital of Afghanistan's Ghor province, an official confirmed. "The final number of casualties would be shared with media later in the day. The number of casualties may change as the rescue of victims from under debris is continuing," the provincial government official told Xinhua news agency. Afghanistan Car Bomb Blast: Suicide Bomber Kills 9 at Military Checkpoint in Southern Afghan.

The official added that many of the injured remained in critical condition. The blast occurred roughly at 11.15 a.m. when an explosive-laden minibus was detonated in an area where the provincial police department and several other government offices are located, a security official told Xinhua. Afghanistan Car Bomb Blast: 15 Killed, Over 30 Injured in Suicide Attack in Ghanikhil District.

"The nature of the blast could be a suspected suicide bombing. The blast sent a column of thick smoke into the sky and triggered panic, besides causing destruction," he said. Security forces have cordoned off the area for precautionary measures. No group has claimed responsibility for the attack yet.

(The above story first appeared on LatestLY on Oct 18, 2020 05:09 PM IST. For more news and updates on politics, world, sports, entertainment and lifestyle, log on to our website latestly.com).