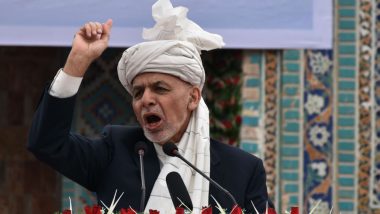 Kabul, July 4: Afghanistan President Ashraf Ghani’s cousin was shot to death inside his home in Kabul on Friday. However, no terrorist group has claimed the responsibility of the attack. More details are still awaited. Last month, Ghani had agreed to hold a round of negotiations with the Taliban in Qatari capital of Doha.

"President Ghani agreed to hold the negotiations with the Taliban in Qatar," Sputnik quoted Al-Qahtani as saying. The envoy had made the remarks after a meeting with Chairman of the Afghan High Council for National Reconciliation Abdullah Abdullah in Kabul. Terror Attack in Afghanistan: Gunmen Attack Sikh Religious Gathering in Kabul; 4 Dead.

(The above story first appeared on LatestLY on Jul 04, 2020 05:54 PM IST. For more news and updates on politics, world, sports, entertainment and lifestyle, log on to our website latestly.com).