Australia Day Controversy: Here's Why Debate Continues Over January 26 And What PM Scott Morrison Has to Say 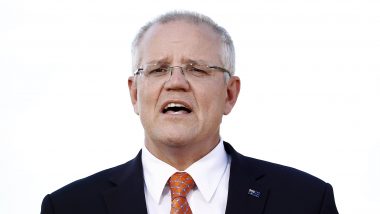 On Thursday, Cricket Australia said promotional material for Big Bash League (BBL) matches played on the holiday would no longer carry the words "Australia Day". Instead, it would just list the date. It added that the decision was taken in recognition of it being a "day of mourning" for many indigenous players. Despite PM Scott Morrison’s Criticism, Cricket Australia Stands Firm on ‘Australia Day’ Decision.

What is Australia Day?

Australia Day is held annually on January 26, the anniversary of the day in 1788 when Captain Arthur Phillip guided a fleet of 11 British ships carrying convicts into Botany Bay in what is now Sydney. The day is controversial because it's held on a date marking British colonisation.

The big question around the day is whether it really is a day to celebrate. Many in Australia observe January 26 as 'Invasion Day'. The day is marked by huge protest rallies with marches seeing participation by hundreds of thousands of people year on year.

In 2019, a video of television host Brooke Boney had gone viral across Australia. "This is the best country in the world no doubt, but I can't separate January 26 from the fact that my brothers are more likely to go to jail than they are to go to school, or that my little sisters and my mum are more likely to be beaten and raped than anyone else's sisters and mum," she was seen saying on the video, which garnered support from people who want January 26 to not be observed as Australia Day.

The 2019 Video That Went Viral

"This is the best country in the world no doubt. But I can't separate the 26th of January from the fact that my brothers are more likely to go to jail than they are to go to school" says @BoneyBrooke, a proud Gamilaroi woman. #9Today pic.twitter.com/fJRzobPeTG

However, Australian PM Scott Morrison, a conservative, remains of the opinion that January 26 is indeed Australia Day. Reacting to the recent Cricket Autsralia controversy, Morrison said, "Australia Day is all about acknowledging how far we've come. When those 12 ships turned up in Sydney, all those years ago, it wasn't a particularly flash day for the people on those vessels either. What that day, to this, demonstrates is how far we've come as a country and I think that's why it's important to mark it in that way."

(The above story first appeared on LatestLY on Jan 22, 2021 01:37 PM IST. For more news and updates on politics, world, sports, entertainment and lifestyle, log on to our website latestly.com).