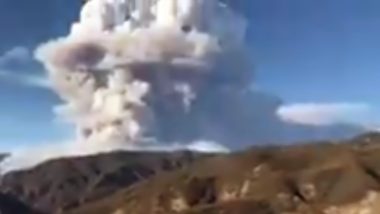 Lake Hughes, August 13: A fast-accelerating bush fire near Lake Hughes in the Angeles National Forest has charred several homes, prompting evacuations as firefighters continue to battle flames. According to officials, the Lake Fire broke out around 3:30 pm PT and quickly spread to 100 acres in size. In just next three hours, the fire had scorched about 10,000 acres area.

The blaze created an enormous column of smoke that can be seen from dozens of kilometres away. So far no injuries have been reported but Los Angeles (LA) County Sheriff's Department has ordered mandatory evacuations. Southern California Wildfire in US: Around 8,000 Residents Evacuated Over 'Apple Fire' in Riverside County.

Dramatic footage from the ground shows rapidly growing Lake Fire burning in California as it expands to 10,000 acres, with evacuations ordered. https://t.co/oge9kWXqQ9 pic.twitter.com/mRFHQql37e

“This creates a lot of downdrafts and erratic winds, something they just don’t need right now. This is in some very rugged, hard to reach areas, so it’s going to be a long time before they get a containment line around this,” said Sam DiGiovanna, fire chief at the Verdugo Fire Academy.

The fire department said that the fire will continue to grow and threaten the surrounding areas of Lake Hughes, Lake Elizabeth, Leona Valley, Pine Canyon and Three points. He also said that air operations to douse off the blaze will continue.

(The above story first appeared on LatestLY on Aug 13, 2020 07:09 PM IST. For more news and updates on politics, world, sports, entertainment and lifestyle, log on to our website latestly.com).