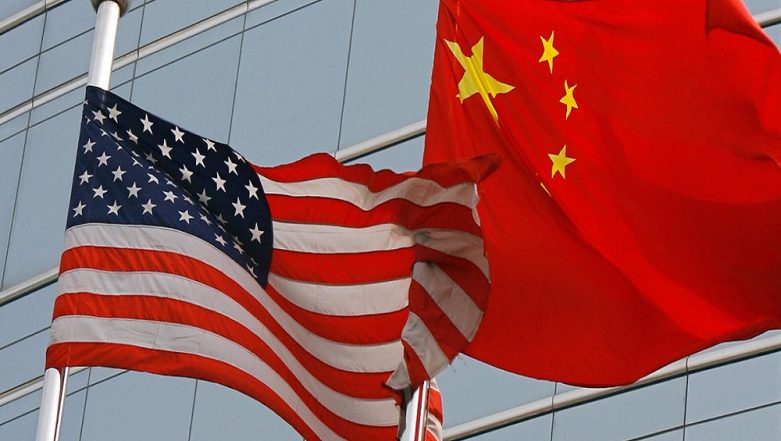 Beijing, May 8: The bilateral trade volume between US and China dropped by 20 per cent in the first four months of this year following a trade war between the world's two largest economies and it could get worse if US President Donald Trump goes ahead and clamp punitive tariffs on USD 200 billion worth of Chinese imports this week, according to official data.

The data - released by the General Administration of Customs here ahead of the crucial 11th round of trade talks to be held in Washington on May 9-10 - said that from January to April, the trade between the two countries was 1.1 trillion yuan (USD 173 billion), down from 20 per cent in 2017 prior to they engaged in a tit-for-tat trade tussle last year. US-China Trade War Escalates: Beijing Imposes Fresh Tariffs on $60 Billion-Worth American Goods.

If Trump goes ahead with his threat to raise tariffs on USD 200 billion worth of Chinese imports from 10 per cent to 25 per cent Friday, the bilateral trade is poised to tumble further, inflicting deeper wounds on the two sides and claiming collateral damages on others, state-run Global Times reported.

The 11th round of talks between China and the US are being held amid uncertainties about future rounds of parleys as Trump administration officials accused Beijing of back tracking from issues agreed in the previous rounds of talks.

Asked about the allegations, Chinese Foreign Ministry spokesman Geng Shuang told the media on Wednesday that negotiation itself is a process of discussion. It is natural for the two sides to have differences, he said.

"China will not sidestep contradictions but we are sincere about continuing the consultations," he said on Tuesday.

In April, China's exports denominated in US dollar terms shifted into reverse, signalling growing downward pressure amid rising uncertainties in world trade amid an ongoing trade conflict between Washington and Beijing.

In April, China's exports reached USD193.49 billion, down 2.7 per cent year-on-year, much lower than expected, GAC data showed. Imports of US goods fell 26 per cent from a year earlier to USD 10.3 billion, while China's exports to US were down by 13 per cent at USD 31.4 billion.

Trump recently hinted that President Xi Jinping could visit the US in June setting off speculation that both countries could work out a trade deal by next month.

Media reports suggest that the two sides are still discussing key issues on structural issues, such as the US accusation of unfair subsidies in China, a mechanism to verify compliance and what to do with the tariffs the two have already imposed on each other's goods.