COVID-19 Vaccination in US: 90% Adults to Be Eligible for Coronavirus Vaccine by April 19, Says Joe Biden

President Joe Biden has announced that 90 per cent of the adults in the US would be eligible for COVID-19 vaccination by April 19 and the rest 10 per cent no later than May 1, amidst warning from a top expert that the country was facing an "impending doom". 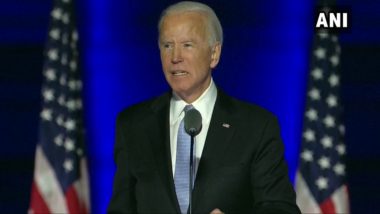 Washington, Mar 30: President Joe Biden has announced that 90 per cent of the adults in the US would be eligible for COVID-19 vaccination by April 19 and the rest 10 per cent no later than May 1, amidst warning from a top expert that the country was facing an "impending doom".

Biden also urged state authorities to once again to make mask-wearing obligatory in public places to combat the disease as the "war is far from won".

Biden's announcement on the vaccination schedule came on a day when the director of the Centers for Disease Control and Prevention Dr Rochelle Walensky warned that the US faces "impending doom" as coronavirus cases and hospital admissions rise across America, the worst-hit by the pandemic. Coronavirus Origin: WHO-China Study Says Animals Likely Source of COVID-19, Lab Leak 'Extremely Unlikely'.

The US has recorded around 60,000 new cases daily for the past week, a rise of around 7 per cent. The US has reported more than 30,331,000 confirmed cases and over 550,000 deaths, according to Johns Hopkins University COVID-19 tracker.

"I'm pleased to announce that at least 90 per cent of all adults in this country will be eligible to be vaccinated by April the 19th, just three weeks from now, because we have the vaccines," Biden told reporters at the White House on Monday.

"For the vast, vast majority of adults, you won't have to wait until May 1. You'll be eligible for your shot on April 19th. Finally, the final 10 per cent will be eligible no later than May 1," he said.

"Due to the steps we're taking today, 90 per cent of Americans will be within five miles of a location where they can get a shot as of April the 19th."

"The progress we're making is a significant testament to what we can do when we work together as Americans. But as I've always said, we still need everyone to do their part. We still are in a war with this deadly virus. And we're bolstering our defences, but this war is far from won," Biden said.

According to Biden, the progress on vaccination is a stunning example that there is nothing this country cannot do if "we put their minds to it".

Biden said just 10 weeks after he became the president, nearly 75 per cent of Americans over the age of 65 had received at least one vaccination shot.

"When I took office on January 20th, that number was 8 per cent. It's going to 75 per cent. That's a lot of grandparents who are now able to safely hug their grandchildren and they couldn't do so just a short time ago," he said.

The president also directed officials to ensure there is a vaccine site within five miles of 90 per cent of all Americans by April 19. Speaking from the White House, President Biden issued a plea to state governors to re-introduce laws that require citizens to wear masks.

Coronavirus rules in the US vary state-by-state, with some governors ordering much stricter restrictions than others.

"If we let our guard down now, we can see the virus getting worse, not better," Biden said.

Meanwhile, Dr Walensky, director of the CDC, warned that the US faces "impending doom" as coronavirus cases and hospital admissions rise across the country.

"I'm going to reflect on the reoccurring feeling I have of impending doom," Walensky said at a White House briefing on Monday, adding "we have so much reason for hope, but right now I'm scared".

The top doctor said she did not want the US to face another spike in cases and deaths as has happened in many European countries.