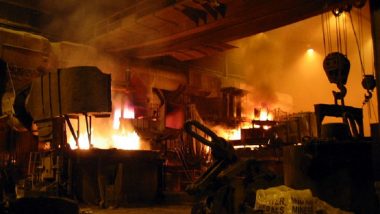 Unswayed by warnings of a trade war from representatives of his own party, economists, and heads of government and state, U.S. President Donald Trump signed an executive order into law imposing steep new tariffs on steel and aluminum imported to the U.S. on Thursday. With the signing he is vowing to fight back against foreign competitors and bring manufacturing jobs back to the U.S.

Trump called the dumping of steel and aluminum in the United States as “an assault on our country.” He told a news conference that the best outcome would be for companies to move to the U.S. and insisted that aiding domestic production and factories was needed for national security reasons. “If you don’t want to pay tax, bring your plant to the USA,” he said.

The new tariffs are set to take effect in 15 days. Trump however, did back track a step on his initial statement of tariffs for ‘all countries’ with Canada and Mexico gaining an indefinite exemption “to see if we can make the deal.” The U.S, Canada and Mexico are working to create a framework to negotiate new conditions for their existing North American Free Trade Agreement (NAFTA).

According to U.S. officials, other countries can apply for exemptions but details of what, how and when they would be granted are yet to be decided.

As the order that imposes a sweeping tariff of 25% on imported steel and 10% imported aluminum was signed, Trump appeared to be hardening his stance on China, with which the U.S. has an annual trade deficit of nearly $500 billion. The U.S. President mentioned China several times in his speech in the Roosevelt Room of the White House at a ceremony wherein he signed the two proclamations of new tariffs.

The US, he said, is negotiating now with China. "We're in the midst of a big negotiation. I don't know that anything is going to come of it. They have been very helpful. President Xi, I have great respect for. A lot of respect," he said. "But we're going to cut down the deficits one way or the other. We have a deficit with China…When you add intellectual property, it's much higher than that," Trump said.

He then referred to a tweet from Tesla chief Elan Musk. "I saw a tweet, just came in from Elon Musk who's using our wonderful space facilities and did a great job three weeks ago. He said, 'For example, an American car going to China pays 25% import duty. But a Chinese car coming to the United States only pays 2.5 per cent. A tenfold difference'," the US President said. "But everybody knows it, they've known it for years. They never did anything about it. It's got to change."

Trump also pitched for the "reciprocal tax" programme, which, he says, would ensure "fair trade deals" for his country. Trump once again raked up the issue of high import duty on Harley-Davidson motorcycles by India.

China, which ranks 11 among the largest sources of U.S. steel imports, cautioned yesterday that it was prepared to "make an appropriate and necessary response" should the United States impose the tariffs.

(The above story first appeared on LatestLY on Mar 09, 2018 08:01 AM IST. For more news and updates on politics, world, sports, entertainment and lifestyle, log on to our website latestly.com).