Ebola Outbreak: Congo Records Second Death from The Fever Amid Hopes of Health Authorities Declaring an End to The 20-Month Epidemic 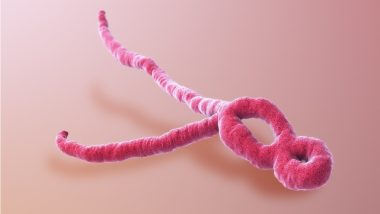 Kinshasa, April 13: A second death from Ebola has been recorded in eastern DR Congo in the final days before a deadline, now scrapped, in which health authorities hoped to declare an end to a 20-month epidemic.

Hopes had been high that the World Health Organization (WHO) on Monday would officially bring the curtain down on the country's 10th known outbreak of the notorious haemorrhagic fever. DR Congo Ebola Death Toll Crosses 2,000 Ahead of UN Chief's Visit.

But on Friday, a 26-year-old man was listed as having died from the disease, and a young girl who was being treated in the same health centre passed away on Sunday.

Both died in the city of Beni, an epicentre of the outbreak, the health authorities said late Sunday.

The epidemic, which began in eastern Democratic Republic of Congo on August 1 2018, has claimed 2,276 lives, according to an official tally.

The outbreak can only be declared officially over after 52 days without any new cases, which is equal to twice the virus' incubation period.

The DRC has so far recorded 20 deaths out of 234 known cases of coronavirus, almost all of them in the capital KInshasa.

(The above story first appeared on LatestLY on Apr 13, 2020 03:23 PM IST. For more news and updates on politics, world, sports, entertainment and lifestyle, log on to our website latestly.com).