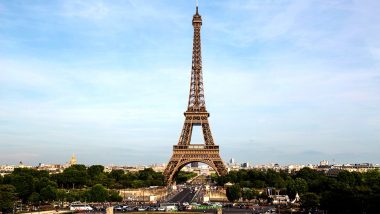 Paris, June 25: The iconic Eiffel Tower in Paris reopened on Thursday to visitors after a three-month closure, the longest since World War Two, due to the COVID-19 pandemic

But the Paris monument isn't returning to normal operations just yet, said a BBC news report.

Visitor numbers will be limited, face coverings mandatory for anyone aged over 11, and everywhere above the second floor will be closed to the public.

To soak in the sights of the iconic monument, visitors will also have to use the stairs since lifts are out of use until July 1.

The tower completed in 1889, hosts around seven million visitors every year, approximately three-quarters of them from abroad, according to its website.

Meanwhile, one of the French capital's other famous landmarks, the Louvre is slated to reopen on July 6.

(The above story first appeared on LatestLY on Jun 25, 2020 03:23 PM IST. For more news and updates on politics, world, sports, entertainment and lifestyle, log on to our website latestly.com).