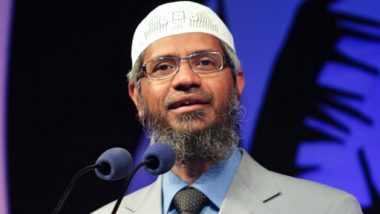 Mumbai, May 26: One of India's moat wanted fugitives, Islamic telly evangelist and zealot Zakir Naik, who is currently based in Malaysia, continues to be engaged in propagation of radical Islamic activities and collection of funds from his wealthy contacts in the Gulf region to support his activities.

Sources close to developments have revealed that Naik has reportedly got in touch with one of his old contacts, a prominent Qatari national, and requested him for a generous charity during the just concluded Ramadan period. Zakir Naik Banned from Delivering Public Speeches in Malaysia Post 'Racist Remarks' Against Hindus, Permanent Resident Status at Stake Too.

The well known Qatari national has reportedly assured an amount of $500,000 to him. It is also learnt that this Qatari national, is a close associate of Naik and helps him contact local wealthy businessmen and charity organisations for collection of funds.

It may be recalled that Naik is an Islamic preacher and televangelist from Mumbai. He is the founder of Islamic Research Foundation (IRP) and Peace TV, an Islamic TV Channel broadcast in Urdu and English from Saudi Arabia. He is also associated with several local radical Islamic organisations such as South Karnataka Salafi Movement and Al-Lisaan Islamic Foundation.

Naik continues to maintain several bank accounts in Gulf countries, including Qatar and the UAE, for collection of such funds to evade scrutiny of the Indian government. He generally uses these accounts to transfer funds to his associates and network for activities by IRF and other associated organisations. The Indian government has since put a five-year ban on IRF.

Naik is involved in preaching of radical Islamic ideology that has influenced a number of youth in India and abroad in adverse manner and some of them are found to have been motivated to join extremist organisations such as Daesh.

Following are some of the instances, in which individuals influenced by Naik have joined terror organisations:

i) Abdul Rasheed @ Abdulla and his wife Yasmin were radicalised while working in Zakir Naik-run Peace International School (Kerala). Subsequently, Abdul Rasheed motivated a group of 23 individuals to join him in leaving the country for Afghanistan to join Daesh.

(ii) Mohd Ibrahim Yazdani and Mohd Uyas Yezdani, kingpin of ISIS-influenced Junood-ul-Khilafafil-Hind (JKF) module which plotted to carry out terror attacks in different parts of India, were influenced by Naik's speeches. The module was neutralised by the Indian agencies in July 2016.

(iv) IRF had provided scholarship to Abu Anas from Rajasthan, who intended to join ISIS and was arrested while he was leaving India for joining ISIS.

(v) Afsha Jabeen @ Nickey Joseph, while based in Dubai was involved in facilitating recruitment for ISIS. She was influenced by Naik. She was deported back to India in September 2015.

(vi) Two Bangladeshi terrorists, namely Nabris Islam and Rohan Imtiaz, who were involved in the July 2016 Holey Artisan Bakery attack in Dhaka, confessed to have been inspired by Naik.

In view of his involvement in extremist activities, multiple non-bailable warrants (NBW) have been issued against Naik by the India authorities on charges of promoting enmity between different groups on grounds of religion, under the Unlawful Activities Prevention Act (UAPA) and for money laundering.

(The above story first appeared on LatestLY on May 26, 2020 09:36 AM IST. For more news and updates on politics, world, sports, entertainment and lifestyle, log on to our website latestly.com).