A passenger ship caught fire in the waters off North Maluku province in Indonesia and all the 200 onboard were rescued safely, a senior disaster agency official said. 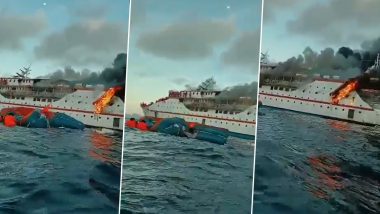 Jakarta, May 30: A passenger ship caught fire in the waters off North Maluku province in Indonesia and all the 200 onboard were rescued safely, a senior disaster agency official said.

The incident took place on Saturday when the KM Karya Indah ship was reaching its destination of Sanana seaport in the island of Limafatola in Kepulauan Sula district, Ahmad Sangadji, head of the emergency unit of the disaster management agency, told Xinhua news agency. Brazil: Fire Breaks Out at COVID-19 Hospital in Aracaju, 4 Dead.

The evacuation process is complete and everyone is safe.

So far no reported injuries or fatalities.pic.twitter.com/h7AWGOiJWf

The fire triggered panic among the passengers, he said.

"All the people on board the ship were saved and they have been sent to the nearby island," Sangadji added.

The ship departed from a sea port in Ternate city of the province.

A team from the local search and rescue office and volunteers were involved in the rescue operation, spokesman of the National Search and Rescue Office Yusuf Latief told Xinhua.

Videos sent by the agency showed thick smoke coming out from the ferry, while some of the people with life jackets jumped into the sea, with rescuers struggling to save them.

(The above story first appeared on LatestLY on May 30, 2021 01:36 PM IST. For more news and updates on politics, world, sports, entertainment and lifestyle, log on to our website latestly.com).