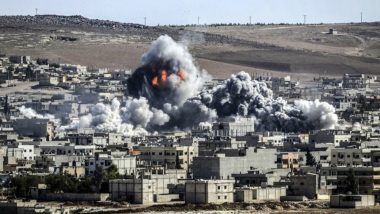 Baghdad, July 8: A US-led coalition airstrike killed three Islamic State (IS) militants in the Iraqi province of Kirkuk on Sunday, while a civilian was killed and two others were wounded in attacks in Diyala province. Acting on intelligence reports from the federal police in Kirkuk, the US-led airstrike was conducted on an IS hideout in the area of Wadi Zghaytoun in the south the city of Kirkuk, some 250 km north of the capital Baghdad, the media office of the Joint Operations Command said in a statement, Xinhua reported.

The airstrike resulted in the destruction of the hideout, the statement added. Separately in Diyala Province, a civilian was killed when IS militants opened fire on the residents of the village of Mkheisa, some 95 km from Baghdad, Alaa al-Saadi from the provincial police told Xinhua. US-Led Airstrike Kills 8 IS Militants in Iraq.

Also in the province, two civilians were wounded in a roadside bomb explosion on the edges of the city of Jalawla, some 135 km from Baghdad, al-Saadi said, adding the roadside bomb was apparently planted by IS militants.

(The above story first appeared on LatestLY on Jul 08, 2019 10:43 AM IST. For more news and updates on politics, world, sports, entertainment and lifestyle, log on to our website latestly.com).