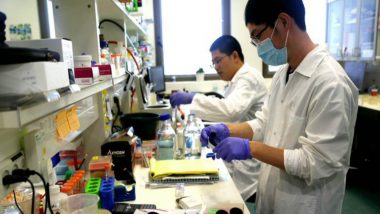 Jerusalem, Aug 15: Israel's laboratory workers, including the ones involved in Covid-19 testing, said that they would launch a general strike in the coming days over low wages.

Esther Admon, chairwoman of the Israel Association of Biochemists, Microbiologists and Laboratory Workers, told Xinhua on Friday that for a long period, lab workers have not only dealt with low wages, but also high workloads.

In Israel, 40 coronavirus labs are operated by public hospitals and state-mandated health service organizations, alongside a private laboratory operated by the genetic-testing company MyHeritage.

According to Admon, instead of supporting the public lab workers, the Ministry of Health plans to open two more private labs, with higher salaries for their workers.

"The population has grown, but a lot of lab workers have reached retirement age and left, with young academic graduates not joining because of the unattractive salaries.

"This increases the workloads," she explained. In recent days, the daily number of COVID-19 tests in Israel has been about 25,000 on average.

On August 9, Israel's Health Minister Yuli Edelstein announced that the number of daily tests would be increased to 60,000, by enhancing the existing labs' capacity and setting up new private labs.

However, this plan may be disrupted if the workers, who are meanwhile holding demonstrations, start the strike they are planning.

(The above story first appeared on LatestLY on Aug 15, 2020 12:17 PM IST. For more news and updates on politics, world, sports, entertainment and lifestyle, log on to our website latestly.com).