The Maldives also urged both countries to resolve their differences amicably. In a statement, the Maldives Foreign Affairs Ministry said that Foreign Minister Abdulla Shahid received a telephone call from his Pakistani counterpart Shah Mahmood Qureshi on Friday afternoon. 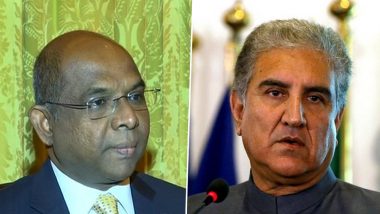 Abdulla Shahid, Maldives Foreign Affairs Minister in a telephonic conversation with his Pakistani counterpart Shah Mahmood Qureshi: The Maldives viewed the decision taken by India regarding Article 370 of the Indian Constitution as an internal matter. (File pics) pic.twitter.com/BjVwZlouTu

Shahid told Qureshi that "both Pakistan and India are close friends and bilateral partners of the Maldives and stressed the importance of resolving differences between countries amicably through peaceful means". Shahid also stated that "Maldives viewed the decision taken by India regarding Article 370 of the Indian Constitution as an internal matter."

He told said that Maldives will always remain a close friend of Pakistan and expressed confidence that the Maldives and Pakistan will continue to cooperate in advancing interests in areas of mutual concern, bilaterally, regionally, and internationally.

(The above story first appeared on LatestLY on Aug 23, 2019 08:52 PM IST. For more news and updates on politics, world, sports, entertainment and lifestyle, log on to our website latestly.com).