Joe Biden Reverses US Withdrawal from WHO

US President Joe Biden has reversed the US process of withdrawing from the World Health Organization (WHO). 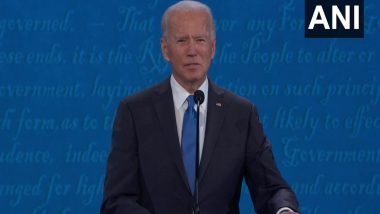 Washington, Jan 21: US President Joe Biden has reversed the US process of withdrawing from the World Health Organization (WHO).

"Americans are safer when America is engaged in strengthening global health. On my first day as President, I will rejoin the @WHO and restore our leadership on the world stage," Biden tweeted in July when the former administration notified the United Nations of withdrawal from the WHO.

According to media reports, Biden picked Anthony Fauci, the nation's top infectious disease expert, to lead a US delegation at the WHO's annual meetings later this week.

Trump and his administration had repeatedly assailed the WHO.

Experts and Democrats had criticized that the Trump administration was trying to shift blames for its mishandling of Covid-19 response and would be counterproductive to addressing the public health crisis.

The United States has registered more than 24.4 million confirmed Covid-19 cases with related deaths exceeding 405,000 as of Wednesday afternoon, showed a tally by Johns Hopkins University.

(The above story first appeared on LatestLY on Jan 21, 2021 09:04 AM IST. For more news and updates on politics, world, sports, entertainment and lifestyle, log on to our website latestly.com).