Kuwait Expat Quota Bill: What Is It and How Indians Will be Affected by The Legislation? 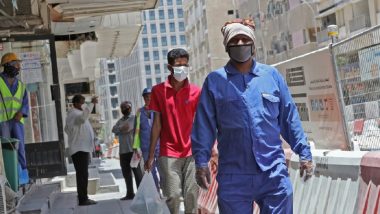 Kuwait, July 6: Lakhs of Indians residing in Kuwait are feared to be adversely affected due to the Expat Quota Bill, whose draft was approved by the National Assembly's legal and legislative committee on Sunday. The legislation, passed through the Parliament and implemented into a law, could lead to the eviction of around 8,00,000 Indians.

What is the Kuwait Expat Quota Bill?

The issue of expatriate community allegedly depriving the local populace of job opportunities in Kuwait has been raging over the past five years.  Prime Minister Sheikh Sabah Al-Khaled Al-Sabah was under mounting pressure to take measures which would safeguard the Kuwaiti nationals and prevent them from turning into a minority in their own nation.

With the expat population crossing to above 70 percent - out of the country's total population of 4.3 million - the government had, in the past year, decided to implement a spree of steps to reverse the demographic ration and bring the native population to above 50 percent.

Among the expatriate community, Indians form the largest group. Nearly 1.45 million of all the expats are from India. The number constitutes over 30 percent of Kuwait's total population.

The Kuwait government decided to bring the Expat Quota Bill -- according to which the number of Indian expatriates in the country should not exceed 15 percent of the Kuwait's population.

How Indians Will be Affected by The Law?

As stated above, the number of Indians in Kuwait, at present, is 1.45 million which is roughly 30 percent of the country's population. As per the Bill, the number should not exceed 15 percent.

Once the law will come into effect, the Kuwaiti government would ask nearly 8,00,000 Indians to leave the nation. The criteria for identification of those who would be asked to leave was yet to be spelled out.

The call for eviction of Indian expats gained pace after the outbreak of coronavirus, when a wrecked economy severely impacted the local populace.

In June, the government announced that employment of expats in the state-owned Kuwait Petroleum Corporation (KPC) and its subsidiaries will remain suspended throughout 2020-21.

A month earlier, the Prime Minister approved the proposal to dismiss all expats from jobs in municipal bodies, and replace them with the locals of Kuwait. A decision was also taken to freeze all new immigration applications and defer the renewal of contracts of expatriates employed on contractual basis.

Safa Al Hashem, the Kuwaiti lawmaker who has been leading a hectic campaign over the past several years to reduce the expatriate population, said the native Kuwaitis could be turned into a miniscule minority if the current pace of immigration continues. She has appealed the government to evict at least 2 million expatriates in the next couple of years to rectify the "demographic imbalance".

(The above story first appeared on LatestLY on Jul 06, 2020 09:51 AM IST. For more news and updates on politics, world, sports, entertainment and lifestyle, log on to our website latestly.com).