China, whose forces regularly intrude into Ladakh, stuck to its opposition to the creation of Ladakh Union Territory, with Chinese Foreign Minister Wang Yi telling his Indian counterpart S. Jaishankar that the move "involves Chinese territory". 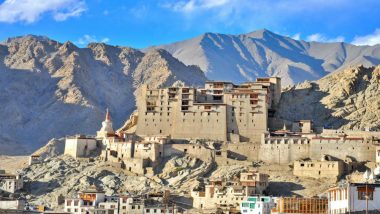 Wang told Jaishankar that the Indian government's announcement of the establishment of the Ladakh Union Territory, "which involves Chinese territory, has posed a challenge to China's sovereignty and violated the two countries' agreement on maintaining peace and stability in the border region". Jammu And Kashmir, Ladakh to Become Union Territories Officially On Sardar Vallabhbhai Patel's 144th Birth Anniversary.

Jaishankar has conveyed to Wang that the creation of Ladakh has "no implication for either the external boundaries of India or the Line of Actual Control (LAC) with China" and that "India was not raising any additional territorial claims".

"India's move is neither valid to China nor will change the status quo - that China exercises sovereignty and administrative jurisdiction over the territories involved", the Global Times quoted Wang as saying, quoting a Chinese Foreign Ministry statement.

Wang said China was concerned about the current Kashmir situation and the escalating India-Pakistan conflict. "India's move to end the constitutional status of Jammu Kashmir will change the status quo of the disputed area and result in regional tensions," he added.

China believes any unilateral action that may complicate the situation in Kashmir should not be taken, Wang said at the meeting.

The paper noted that though Jaishankar's visit was predetermined, "many observers called it an 'emergency visit' because it came after Pakistan Foreign Minister Shah Mahmood Qureshi made an emergency visit to China Friday evening and briefed Wang on Pakistan's views, position and countermeasures on Kashmir".

The state-run daily quoted "Chinese observers" to say that "India's move was reckless. They noted that Kashmir is a powderkeg filled with territorial disputes and ethnic and regional conflicts. They added that the situation is not India's 'internal affairs'."

"Scraping (sic) Kashmir's special status is just a carnival of nationalism. If the Indian government continues hyping this mood, it will become more and more radical and will surely backfire," it said, quoting Zhao Gancheng, Director of the Center for Asia-Pacific Studies at the Shanghai Institute for International Studies.

"A radical and nationalistic India won't be embraced by Asia," Zhao told the Global Times.

"India's rise needs a peaceful neighborhood, and provoking Pakistan is not a good way to solve it," Zhao said.

(The above story first appeared on LatestLY on Aug 13, 2019 01:19 PM IST. For more news and updates on politics, world, sports, entertainment and lifestyle, log on to our website latestly.com).