Migratory Species Among Most Vulnerable to Plastic Pollution: UN Report

Another marine mammal protected by CMS in the Asia-Pacific region is the Dugong, which has been shown to become entangled in fishing nets and drown. Entanglement is the greatest threat, and it is likely to cause the highest number of Dugong deaths, including in river deltas. 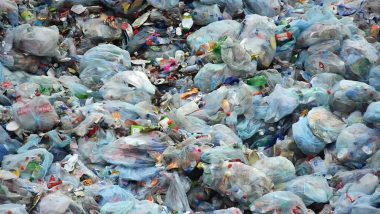 New Delhi, August 31: Migratory species are likely to be among the most vulnerable to plastic pollution, a new study released by the Secretariat of the UN's Convention on the Conservation of Migratory Species of Wild Animals (CMS) said on Tuesday. The study focused for the first time on the impacts that plastic pollution has on animals that live on land and in freshwater environments in the Asia-Pacific region.

The study included case studies on the Ganges and Mekong river basins, which together contribute an estimated 200,000 tonnes of plastic pollution to the Indian Ocean and the Pacific Ocean every year.

But not all plastic pollution reaches the oceans. The study found that species protected under CMS are impacted by plastic pollution in river ecosystems and on land, including freshwater species, land animals and birds.

Air-breathing freshwater mammals are particularly at risk from plastic pollution. Entanglement in plastic waste can prevent them from reaching the surface, leading to drowning. Heights of Plastic Pollution! Scientists Find Microplastics in Snow and Stream Water Near the Peak of Mount Everest.

With an estimated 3,500 individuals remaining in the wild, the Ganges River Dolphin was recently rated as the second most vulnerable species at risk of entanglement and negative effects from discarded fishing gear in the Ganges.

In the Mekong, drowning because of entanglement in nets is the key threat to Irrawaddy Dolphins that are estimated to number less than 100 individuals. Both dolphin species are classified as Endangered on the IUCN Red List.

Another marine mammal protected by CMS in the Asia-Pacific region is the Dugong, which has been shown to become entangled in fishing nets and drown. Entanglement is the greatest threat, and it is likely to cause the highest number of Dugong deaths, including in river deltas. Ingestion of plastics has also contributed to Dugong deaths in India and Thailand.

Plastic pollution can also impact other migratory and resident species that live in freshwater environments including fish, through entanglement as well as through the ingestion of microplastics that can in turn impact species along the food web.

While most plastics are used and disposed of on land, most research on the impacts of plastic pollution has focused on marine ecosystems. Terrestrial environments are particularly under-represented in plastic pollution research globally.

However, evidence indicates that plastic ingestion is likely to be adversely impacting a wide variety of animals on land.

Protected under CMS since the 13th Conference of the Parties in 2020, the Asian elephant has been observed scavenging on rubbish dumps in Sri Lanka, and ingesting plastic in Thailand.

With nearly 500 species, birds represent over 80 per cent of the CMS-listed species in the Asia-Pacific region, and there is significant evidence for bird interaction with plastics.

Migratory birds such as the black-faced spoonbill and the osprey have been observed making nests out of plastics, using fishing lines and shipping debris, often resulting in the entanglement of their chicks.

Migratory seabirds, such as black-footed albatrosses and laysan albatrosses, appear to be particularly vulnerable to plastic ingestion. They may not distinguish floating plastic items from prey when flying over the ocean. Plastic debris may then accumulate in their gut or be passed to their offspring through regurgitation.

CMS Executive Secretary Amy Fraenkel said: "Since most plastic pollution is generated on land, it is unfortunately not surprising that it is impacting migratory and other animal species that live on land and in freshwater environments. Plastic Pollution from Fishing Nets Threatening Ganges Wildlife, Finds Study.

"Clearly, we have huge gaps in the scientific literature of the threats of plastic pollution on many CMS species. We need more research to better identify risks to these species, and take appropriate steps to address them."

In Mekong, discarded fishing gear poses a major threat, with entanglement a particularly widely reported problem. This is especially the case for aquatic species, but also for terrestrial and avian species which encounter these discarded materials on land. In addition to discarded fishing gear, kite strings are especially an issue for land birds, and have been estimated as the second most frequent source of plastic interaction.

(The above story first appeared on LatestLY on Aug 31, 2021 09:42 PM IST. For more news and updates on politics, world, sports, entertainment and lifestyle, log on to our website latestly.com).