Heights of Plastic Pollution! Scientists Find Microplastics in Snow and Stream Water Near the Peak of Mount Everest

Researchers have found microplastics hidden in the snow and streams on the famous climbers’ mecca, Mount Everest, adding to the concerning body of evidence that no place on Earth is free from these microscopic pollutants. 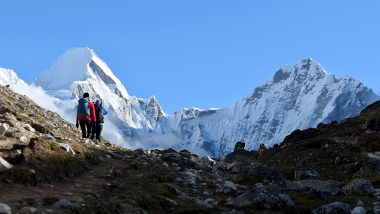 Much of the planet is swimming in discarded plastic, which is harming the living beings across. Plastic pollution has become one of the most pressing environmental issues. Rapidly increasing production of disposable plastic products overwhelms the world’s ability to deal with them. No place is safe and plastic pollution has reached a new height, after scientists discovered tiny bits of plastic polluting the snow on iconic Mount Everest. Yes, you read that, right! Researchers have found microplastics hidden in the snow and streams on the famous climbers’ mecca, adding to the concerning body of evidence that no place on Earth is free from these microscopic pollutants.

According to the study, published in One Earth, scientists revealed that the tiny plastic fibres were found within a few hundred metres of the top of the 8,850-metre mountain, at a spot called balcony. Microplastics were found in all the snow samples collected from 11 locations on the Everest. The presence of tiny plastics was found in every snow sample from five locations and in three out of eight stream water samples from the remaining six locations.

The research was funded by the National Geographic Society and Rolex and is the first to document the presence of microplastics in snow and stream water on Mount Everest. The highest concentrations of trash were found around Base Camp, where climbers and trekkers spend the most time. As per the researchers, the fibres were most likely to have come from clothing, tents and ropes used by mountaineers.

“It really surprised me to find microplastics in every single snow sample I analysed. Mount Everest is somewhere I have always considered remote and pristine. To know we are polluting near the top of the tallest mountain is a real eye-opener,” Imogen Napper was quoted saying, at the University of Plymouth, who led the new research. The most common polymers detected were polyester, acrylic and nylon fibres.

In the decades since Sir Edmund Hillary and Tenzing Norgay became the first to summit the mountain, Everest has transformed into a popular destination for climbers. Hundreds of people flock to the site every year, often leaving their trash behind. The latest study adds to an unfortunate trend—scientists are worried that there is likely no place on Earth free of microplastic pollution.

(The above story first appeared on LatestLY on Nov 21, 2020 04:02 PM IST. For more news and updates on politics, world, sports, entertainment and lifestyle, log on to our website latestly.com).