Senior Republican leader and former presidential candidate Marco Rubio was among those who were categorically critical of Disney's approach. He claimed that reports across the media over the past three years have confirmed the presence of concentration camps in Xinjiang where China holds up ethnic Uyghur and other Turkic Muslims. 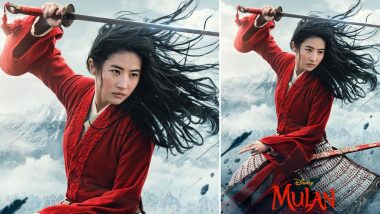 Washington, September 12: Walt Disney, the producer of $200 million war-action epic 'Mulan', has come under the scrutiny of a bipartisan panel of United States lawmakers. The Senators and Representatives of Democratic and Republican parties are on the same page in questioning the media behemoth over its cooperation with China in Xinjiang despite the Uyghur "genocide". China’s Oppression of Uyghur Muslims in Xinjiang Amounts to ‘Genocide’, Says Biden Campaign Committee.

Questions were sent to Disney on Friday, after a meeting was convened by the Congressional-Executive Commission on China (CECC). In the strongly-worded letter written to the company, the lawmakers asked Disney whether it was not aware of the persecution of Uighurs while seeking aid from the Chinese Communist Party to shoot the film in Turpan city of Xinjiang.

Senior Republican leader and former presidential candidate Marco Rubio was among those who were categorically critical of Disney's approach. He claimed that reports across the media over the past three years have confirmed the presence of concentration camps in Xinjiang where China holds up ethnic Uyghur and other Turkic Muslims.

Chairs send bipartisan letter to @Disney inquiring about the filming of #Mulan in #Xinjiang #Uyghur Autonomous Region (XUAR) and #Disney’s relationship with security and propaganda entities responsible for committing, or covering up, atrocities in the #XUAR. pic.twitter.com/ucKTc7o1LV

"The decision to film parts of Mulan in cooperation with the local security and propaganda elements, offers tacit legitimacy to those perpetrators of crimes that may warrant the designation of genocide," Rubio said.

Disney was yet to respond to the questions sent by the congressional panel. Ethnic Turks living in all parts of the world have called for the boycott  of Mulan, claiming that Disney has attempted to "whitewash" the crimes of Chinese authorities in Xinjiang by releasing the film.

"By filming the movie in Turpan, East Turkestan, where there are possibly hundreds of thousands of Uyghurs being detained in concentration camps and prisons, Disney is not only helping promote Chinese government propaganda but it is also helping the CCP whitewash the genocide faced by Uyghurs and demonising the Uyghurs and other Turkic peoples of East Turkistan as 'barbarians' and as enemies of China and the Chinese people," said a statement issued by East Turkestan National Awakening Movement (ETNAM).

The area of Xinjiang, during the days of Ottoman Empire, was referred to as East Turkestan. The provincial population was stated to be 90 percent Muslims till a decade ago, before China launched a "re-education programme" which critics have labelled as "ethnic cleansing".

(The above story first appeared on LatestLY on Sep 12, 2020 05:02 PM IST. For more news and updates on politics, world, sports, entertainment and lifestyle, log on to our website latestly.com).