The Myanmar junta is increasingly desperate to block the citizens from accessing independent news and information about its ongoing human rights violation. Mobile internet data and wireless broadband have been turned off for more than six weeks, and Facebook and other social media platforms popular in Myanmar have been blocked since the coup. 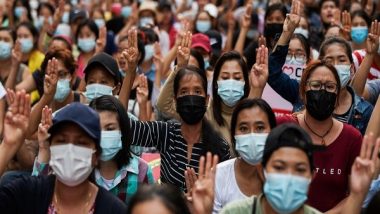 Kolkata, May 6: The Myanmar junta has banned satellite television after imposing severe restrictions on the Internet and media, provoking global rights groups to protest the military's tightening grip over information flow in the country. The ruling State Administration Council announced this week that anyone using satellite dishes to watch television will face up to one year in prison or a fine of 500,000 kyats ($320). The military junta claimed that "illegal organizations and news agencies" were broadcasting programs via a satellite that threaten state security. Myanmar Coup: India Condemns Violence, Says 'We Stand For Restoration of Democracy'.

The ban appears targeted at independent Burmese language broadcasters such as the Democratic Voice of Burma (DVB) and Mizzima, which have continued broadcasting via satellite since the junta revoked their operating licenses in March. The ban will also affect foreign news channels broadcast via satellite into Myanmar. "The satellite TV ban is a blatant attempt to deny access to independent news broadcasts and further isolate Myanmar's people," said Linda Lakhdhir, Asia legal advisor at Human Rights Watch. "The junta should immediately withdraw its outrageous blanket censorship and end its relentless assault on news reporting." Manipur Govt Withdraws ‘No Food, Shelter for Myanmar Refugees’ Order After Backlash.

The ban on satellite television is part of the military's full-scale attack on the country's media, alleged Mizzima chief editor Soe Myint. He told IANS the military crackdown now extends from ground to air in an unprecedented way and Myanmarese people can only look forward to the global community to redress their plight. On May 4, the junta also announced that it was banning two more media outlets, Kachin-based 74 Media and Shan-based Tachileik News Agency, increasing the number to eight.

Many of those outlets, including 74 Media and Tachileik News, have responded with defiance to the junta's bans, vowing to continue their reporting. In addition to banning media outlets, the security forces have aggressively targeted journalists for arrest. At least 71 journalists have been arrested since the February 1 coup, of whom at least 48 remain in detention.

The authorities have charged many of those detained, including Japanese freelance reporter Yuki Kitazumi, with violating a new provision in the penal code adopted by the junta that makes it a crime to publish or circulate comments that "cause fear" or spread "false news". Those convicted face up to three years in prison.

The authorities have imposed severe restrictions on the internet, making it very difficult for people to access or to share information. Mobile internet data and wireless broadband have been turned off for more than six weeks, and Facebook and other social media platforms popular in Myanmar have been blocked since the coup.

"The Myanmar junta's increasingly desperate efforts to block those inside the country from accessing independent news and information won't hide the truth about its ongoing violations of rights," HRW's Lakhdhir said. "Concerned governments should use their wide array of tools, including arms embargos and targeted sanctions, to pressure the junta to end its rights abuses and bring those responsible to account."

(The above story first appeared on LatestLY on May 06, 2021 01:19 PM IST. For more news and updates on politics, world, sports, entertainment and lifestyle, log on to our website latestly.com).