As the current spring season draws to an end, climbers and expedition organisers have reported more COVID-19 cases on the world's tallest peak, Mt. Everest, while an official from the Nepal's Department of Tourism has denied it, saying no written reports were presented yet. 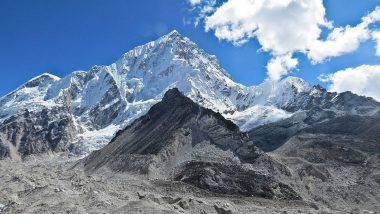 Kathmandu, May 25: As the current spring season draws to an end, climbers and expedition organisers have reported more COVID-19 cases on the world's tallest peak, Mt. Everest, while an official from the Nepal's Department of Tourism has denied it, saying no written reports were presented yet.

Damian Browne, a former Irish professional rugby player who attempted to summit the peak this year, announced in a social media post on May 22 that four climbers of his team, including himself, were infected with the COVID-19, Xinhua news agency reported.  World News | Nepal Urges US for 'priority' on Covid-19 Vaccines

"Of the four-team members evacuated and sequestered, two including me have symptoms and two don't," he wrote.

"For me, learning that I have COVID-19 was in a way a relief and answered many questions I had, but for the guys showing no symptoms and feeling strong, this evacuation and quarantine must be unbelievably frustrating."

Expedition company Climbing the Seven Summits (CTSS) had organised the climb for the team involving Browne.

"In fact, 11 members of the expedition team who were tested positive with rapid test kits, were brought to Kathmandu but only four of them tested positive in PCR examination," he said.

A total of 39 climbers from the CTSS expedition came to summit Everest.

"So far, 10 have already scaled the world's tallest peak, with at least one of them having tested positive in antigen test but later tested negative in PCR," said Poudel.

On May 15, Lukas Furtenbach, managing director of Furtenbach Adventures, an Austria-based mountaineering expedition company, announced that the firm had cancelled its current expedition to Mt. Everest due to increasing coronavirus infections at the base camp of the world's tallest peak.

Furtenbach, currently in Kathmandu, told Xinhua that he submitted the evidence of climbers infected with coronavirus at the base camp to the Nepali authorities on Sunday.

"I produced evidence of 10 infections to the Department of Tourism after I was asked to submit a full report including our evidence," he said.

According to Furtenbach, at least 100 infections have been confirmed by doctors, insurance companies, expedition leaders and evacuated climbers themselves.

Eight members of his team had contracted coronavirus as well.

"In other teams, up to 30 people have been infected," he said.

Although reports about COVID-19 cases at the Everest base camp have been making international headlines, Nepali authorities have not spoken of the issue explicitly.

Officials at Nepal's Tourism Department, which issues climbing permits to climbers, have continued to insist that they have not been officially informed about anybody being infected with the virus. China-Donated Oxygen Cylinders Reach Nepal Amid COVID-19 Crisis

Other officials at the Department told Xinhua that they were verbally notified about the issue but they were not sure about the number of infections.

Norwegian climber Erlend Ness became the first to test positive for Covid-19 at Mt. Everest base camp and was flown by helicopter to Kathmandu for treatment.

He told the press last month that he tested positive on April 15.

Despite concerns about the outbreak, a large number of climbers have remained on the mountains.

"We have got reports about around 350 mountaineers reaching the top of Mt. Everest so far since early May in the spring season," Acharya said.

Officials at the Tourism Department said they allowed climbers to set for Mt. Everest only after they tested negative in PCR tests in Kathmandu.

Furtenbach believes, however, the rules were not enforced strictly.

"There were no health protocols from the authorities for (Mt. Everest) base camp. Only PCR test in Kathmandu and that was not enforced as many teams left Kathmandu to Khumbu (base of Mt. Everest) without PCR," he added.

(The above story first appeared on LatestLY on May 25, 2021 02:22 PM IST. For more news and updates on politics, world, sports, entertainment and lifestyle, log on to our website latestly.com).