The Nobel Prize in Chemistry for 2019 has been awarded to John B. Goodenough, M. Stanley Whittingham and Akira Yoshino. The Swedish academy awarded the prize to the three researchers 'for the development of lithium-ion batteries.' 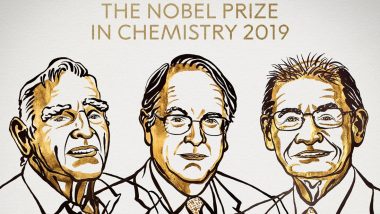 Stockholm, October 9: The Nobel Prize in Chemistry for 2019 has been awarded to John B. Goodenough, M. Stanley Whittingham and Akira Yoshino. The Swedish academy awarded the prize to the three researchers “for the development of lithium-ion batteries.” On 27 November 1895, Alfred Nobel signed his last will and testament, giving the largest share of his fortune to a series of prizes, the Nobel Prizes. As described in Nobel’s will one part was dedicated to “the person who shall have made the most important chemical discovery or improvement." Nobel Prize 2019 Announcements Dates and Time in IST: When Will Prizes in Physics, Chemistry, Economics, Literature and Peace Be Awarded? Know Complete Schedule.

"The Nobel Prize in Chemistry 2019 rewards the development of the lithium-ion battery. This lightweight, rechargeable and powerful battery is now used in everything from mobile phones to laptops and electric vehicles. It can also store significant amounts of energy from solar and wind power, making possible a fossil fuel-free society," read the Nobel press release on Chemistry winners.

Lithium-ion batteries are used globally to power the portable electronics that we use to communicate, work, study, listen to music and search for knowledge. Lithiumion batteries have also enabled the development of long-range electric cars and the storage of energy from renewable sources, such as solar and wind power.

The 2019 #NobelPrize in Chemistry has been awarded to John B. Goodenough, M. Stanley Whittingham and Akira Yoshino “for the development of lithium-ion batteries.” pic.twitter.com/LUKTeFhUbg

Below Are Short Profiles of Winners From the Nobel Academy

Stanley Whittingham worked on developing methods that could lead to fossil fuel-free energy technologies. He started to research superconductors and discovered an extremely energy-rich material, which he used to create an innovative cathode in a lithium battery. This was made from titanium disulphide which, at a molecular level, has spaces that can house – intercalate – lithium ions.

The battery’s anode was partially made from metallic lithium, which has a strong drive to release electrons. This resulted in a battery that literally had great potential, just over two volts. However, metallic lithium is reactive and the battery was too explosive to be viable.

John Goodenough predicted that the cathode would have even greater potential if it was made using a metal oxide instead of a metal sulphide. After a systematic search, in 1980 he demonstrated that cobalt oxide with intercalated lithium ions can produce as much as four volts. This was an important breakthrough and would lead to much more powerful batteries.

With Goodenough’s cathode as a basis, Akira Yoshino created the first commercially viable lithium-ion battery in 1985. Rather than using reactive lithium in the anode, he used petroleum coke, a carbon material that, like the cathode’s cobalt oxide, can intercalate lithium ions.

Facts About the Nobel Prize in Chemistry

63 Chemistry Prizes have been given to one Laureate only.

5 women have been awarded the Chemistry Prize so far.

(The above story first appeared on LatestLY on Oct 09, 2019 03:27 PM IST. For more news and updates on politics, world, sports, entertainment and lifestyle, log on to our website latestly.com).