Pakistan Prime Minister Imran Khan has vowed that "come what may", he will not step down and face the no-confidence motion filed by the joint Opposition against him in the National Assembly, Express Tribune reported. 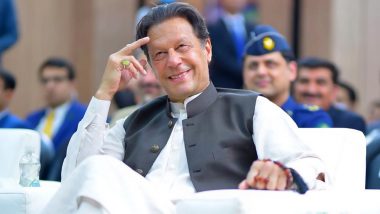 Islamabad, March 31: Pakistan Prime Minister Imran Khan has vowed that "come what may", he will not step down and face the no-confidence motion filed by the joint Opposition against him in the National Assembly, Express Tribune reported.

"Vote on the no-confidence motion will be held this Sunday [April 3] when it will be decided in which direction this country will go," he said while addressing the nation on Thursday evening.

"I will not resign and will fight till the last ball," he added.

The premier, while terming the no-trust move as a "foreign-backed conspiracy" to topple his government, said that the nation will not forgive those lawmakers who will vote against him in the Lower House of the Parliament.  Pakistan Political Crisis: No-Trust Vote Against Imran Khan Deferred to April 3

"People should see those people [lawmakers] who will 'sell their conscience' on Sunday," said Khan as he warned the parliamentarians that the coming generation will never forget them if they voted against him.  Pakistan PM Imran Khan Cancels Address to Nation After Meeting Army Chief Qamar Javed Bajwa

"I will never let this conspiracy succeed come what may," he said.

The Prime Minister, who appears to have lost majority in the National Assembly after the Muttahida Qaumi Movement-Pakistan (MQM-P) joined hands with the Opposition, has accused the Opposition of being part of a 'foreign-funded' conspiracy to dislodge his government.

To corroborate his claim, Khan is also using an alleged letter by a foreign power wherein Pakistan has been warned of "grave consequences" if the no-trust motion failed.

(The above story first appeared on LatestLY on Mar 31, 2022 10:47 PM IST. For more news and updates on politics, world, sports, entertainment and lifestyle, log on to our website latestly.com).