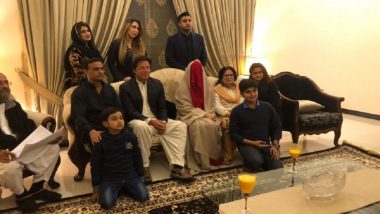 Lahore, Aug 27: A senior Pakistani police officer was sacked after he refused to tender an apology to former husband of Prime Minister Imran Khan's third wife Bushra Bibi for stopping him at a picket. The Punjab government today removed District Police Officer (Pakpattan) Rizwan Omar Gondal from his post and ordered him to report to the central police office Lahore following his refusal to tender an apology to Khawar Manika, ex-husband of Bushra Bibi.

A senior police officer told PTI that Khawar Manika was coming from Lahore to Pakpattan (some 175-km from Lahore) when he was stopped at a picket at 1 am on August 23.

"Manika didn't stop his car when police signalled him at the picket. Police chased his car and intercepted it a few kms away. Khawar Manika hurled abuses at police officials for not letting him go despite his introduction." The official said DPO Gondal was summoned by newly elected Chief Minister Usman Buzdar on Friday last. "The chief minister told the DPO that Manika has complained that police officials had misbehaved with him therefore he should apologise. Gondal, however, refused to apologise saying he didn't do anything wrong. On this the chief minister ordered his removal," the officer said, adding Gondal has been removed on the direction of Imran Khan after Bushra Bibi took up the matter with him.

Opposition PML-N has criticised Imran Khan for intervening in the matter of his wife's ex-husband. "This is merit what Imran Khan has been talking after coming to power. What example Khan has set to remove senior police officer is before everyone and it is regrettable," PML-N former minister Malik Ahmad said. Early this year, Khan married his "spiritual guide" Bushra Bibi.