Iryna Venediktova, the Prosecutor General of Ukraine, said that the bodies of 410 civilians killed in Bucha, about 60 km from Kiev, have been taken to be examined by forensic experts, adding that any evidence gathered will be recorded for the ongoing case of Russian war crimes. 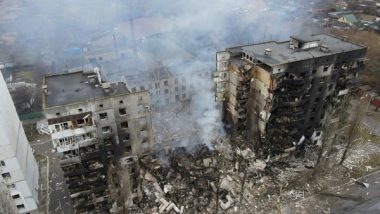 Kiev, April 4: Iryna Venediktova, the Prosecutor General of Ukraine, said that the bodies of 410 civilians killed in Bucha, about 60 km from Kiev, have been taken to be examined by forensic experts, adding that any evidence gathered will be recorded for the ongoing case of Russian war crimes.

In a social media post, Venediktova said that experts from the forensic bureau will conduct DNA examinations, autopsies, and sampling of the bodies, reports Ukrayinska Pravda. She said of the 410 bodies which were found between April 1-3, 140 of them have already been examined by prosecutors and other specialists. GRAMMYs 2022: Volodymyr Zelenskyy Addresses The Viewers With A Powerful Message; Ukraine President Says, ‘Support Us In Any Way You Can’ (Watch Video).

According to the Prosecutor General, there is "crucial evidence of brutal war crimes perpetrated by the Russian Federation in the liberated territories of the Kiev region" "This hell must be documented in order to punish its inhuman perpetrators."

The city of Bucha, along with Monastyrskyi, Irpin, Hostomel, Borodyanka, Makariv, Kopyliv, Motyzhyn, all in the Kiev region, were liberated from Russian forces on April 2. Later that day, Bucha Mayor Anatoliy Fedoruk announced that a mass grave was discovered in the city where almost 300 people were buried.

Dozens of corpses lay in the streets, some of them with their hands tied, he said, adding the bodies of naked women were also found on the city streets. President Volodymyr Zelensky has termed the killings as "genocide", Ukrayinska Pravda reported.

In a video address on Sunday night, he said: "This is how the Russian state will be perceived now. This is your image. Your culture and your humanity have died alongside the citizens of Ukraine whose land you have come to."

The President also rebuked NATO for delaying Ukraine's invitation to join the Alliance. But Russia has denied allegations that its forces had anything to do with the killings. "While Bucha was under the control of the Russian Armed Forces, none of the local residents suffered from any acts of violence," the Russian Ministry of Defence said.

The Ministry further claimed that the photos and videos published of the carnage in Bucha had been faked by the Ukrainian government. The developments in Bucha have received widespread condemnation.

While UK Prime Minister Boris Johnson accused Russia of "despicable attacks", US Secretary of State Antony Blinken described the killings as a "punch to the gut", the BBC reported.

(The above story first appeared on LatestLY on Apr 04, 2022 09:34 AM IST. For more news and updates on politics, world, sports, entertainment and lifestyle, log on to our website latestly.com).