At least 21 people were killed and 25 were injured on Thursday when Russian forces shelled a town in eastern Ukraine, a local official said. Of the wounded, 10 people are in serious condition. 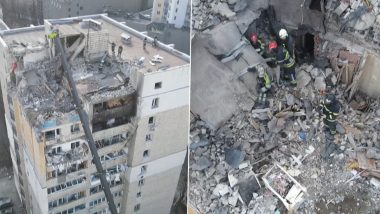 Kyiv, March 17: Russian attack on Ukrainian land increased as the Russian invasion of Ukraine entered its fourth week. On Thursday, Ukraine said that the Russian forces destroyed a drama theatre where women and children had been sheltering in the besieged southern port of Mariupol.

An official in the Mariupol mayor's office said a bomb shelter at the theatre had "withstood" and there were survivors, but details of casualties were still not known. At least 130 civilians were rescued from the drama theatre bomb shelter. Russia-Ukraine War: Facebook Removes Deepfake Video of Ukrainian President Volodymyr Zelensky Asking Citizens To 'Lay Down Arms'.

At least 21 people were killed and 25 were injured on Thursday when Russian forces shelled a town in eastern Ukraine, a local official said. Of the wounded, 10 people are in serious condition. A school and a cultural centre in the town of Merefa outside the city of Kharkiv were hit by shelling, regional prosecutors said.

10 people are in critical condition, Kharkiv Oblast Prosecutor’s Office reported. The city of Merefawas shelled on March 17. A local school and community center were destroyed.

Emergency services search for survivors on Thursday amid the wreckage of a building hit by a Russian airstrike the previous day near Kyiv city centre.

Emergency services search for survivors on Thursday amid the wreckage of a building hit by a Russian air strike the previous day near Kyiv city centre (NO SOUND) pic.twitter.com/ssoyFE2Sgr

European Space Agency on Thursday suspended a Russian-European mission to land a rover on Mars over Moscow's invasion of Ukraine. The mission had been planned to launch in September using a Russian launcher and lander to put the rover on Mars to drill into the soil, searching for signs of life. In response to the suspension of the mars mission, Russia’s space agency head called the decision by the ESA “bitter” and said Moscow regretted the decision. Russia-Ukraine War Latest Updates: Shells Hit Theatre Sheltering Ukraine Civilians; Kyiv Slams Russian Appeal to Support Humanitarian Draft.

The global economic fallout of the war in Ukraine is expected to negatively impact India's economy, while the immediate impact of the conflict on China is likely to be relatively small, the IMF said on Thursday.

NATO will not intervene militarily in Russia’s war against Ukraine. During a press conference on March 17, German Chancellor Olaf Scholz said that his country will, however, continue to support Ukraine.

(The above story first appeared on LatestLY on Mar 17, 2022 10:06 PM IST. For more news and updates on politics, world, sports, entertainment and lifestyle, log on to our website latestly.com).