Russia's foreign ministry said Tuesday that US President Joe Biden and a dozen other top officials had been banned from entering the country in a reciprocal response to US sanctions. 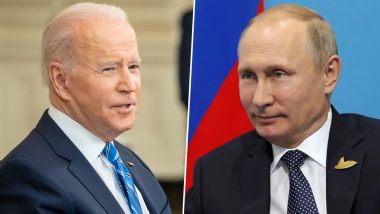 Kyiv, March 15: The Russian attack in Ukraine inched closer to central Kyiv on Tuesday. A series of Russian missile strikes hit a residential neighborhood in the capital. Four people were killed in airstrikes on the capital on Tuesday morning, said Kyiv's mayor. While two people were killed after a strike hit a 16-storey building in the Sviatoshynsky district.

As per the AFP, Pierre Zakrzewski, a Fox News cameraman was killed while working on the ground near Kyiv, the network said on Tuesday. Zakrzewski was killed and his colleague Benjamin Hall was wounded when their vehicle was struck Monday by incoming fire in Horenka, outside the capital, Fox News Media CEO Suzanne Scott said. Russia-Ukraine War: Europe Faces Deficit in Sunflower Oil As Exports From Ukraine Stops.

Ukrainian President Volodymyr Zelenskyy on Tuesday said that Ukraine realizes that it can't join NATO. Zelenskyy, while speaking to representatives of the UK-led Joint Expeditionary Force (JEF), said that “we heard for years about the allegedly open doors of NATO, but we have already heard that we won't be able to join."

(The above story first appeared on LatestLY on Mar 15, 2022 10:18 PM IST. For more news and updates on politics, world, sports, entertainment and lifestyle, log on to our website latestly.com).