The South Korean government's YouTube channel was hacked on Saturday, apparently to broadcast a cryptocurrency-related video including Tesla CEO Elon Musk, but has been restored, according to sources. 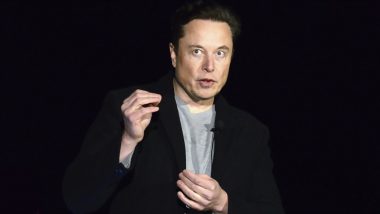 Seoul, Sep 3: The South Korean government's YouTube channel was hacked on Saturday, apparently to broadcast a cryptocurrency-related video including Tesla CEO Elon Musk, but has been restored, according to sources.

At 3.30 a.m., the government's official channel on the video-sharing platform appeared to have been hacked as its name changed to "SpaceX Invest" and showed a live broadcast on cryptocurrency that included an interview with American billionaire and SpaceX founder Musk. Twitter’s Partner Team To Fight Online Extremism ‘Vanishes’ After Elon Musk Takeover.

An official at the culture and tourism ministry, which manages the YouTube account, said they had become aware of the situation at 6 a.m., took security measures and restored the account at 7:20 a.m.

The official said the account's ID and password were suspected to have been stolen.

An official at Google Korea said that it was currently looking into the cause of the incident. Ministry of IT Organises Training for Govt Officials To Make ‘Cyber Safe India’.

The attack follows a hack of a YouTube channel operated by the Korea Tourism Organisation (KTO), under the tourism ministry, earlier this week.

According to KTO, the channel, which has around 509,000 subscribers, was initially targeted on Thursday and again the next day. The channel is currently unavailable.

A KTO official said that Google automatically blocks access to the account if it spots abnormal connections.

(The above story first appeared on LatestLY on Sep 03, 2022 03:50 PM IST. For more news and updates on politics, world, sports, entertainment and lifestyle, log on to our website latestly.com).